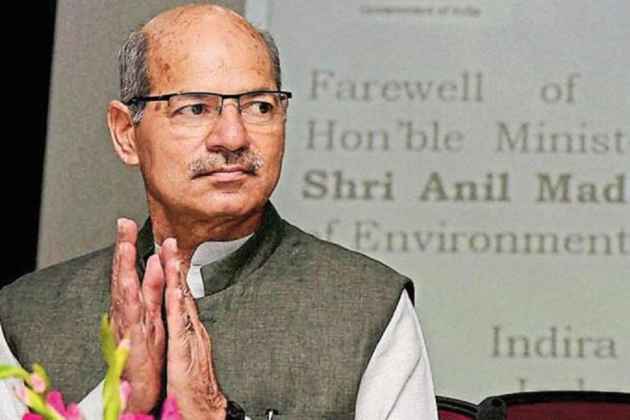 Print
A
A
A
increase text size
Outlook May 18, 2017 11:40 IST Anil Madhav Dave: A man passionate about river conservation

An expert in river conservation and a member of the parliamentary forum on global warming, environment was a subject close to the heart of Anil Madhav Dave who was appointed environment minister only last year.

Dave was involved in social work right from his early days and founded NGO "Narmada Samagra" for conservation of the river.

A two-time Rajya Sabha MP from Madhya Pradesh, Dave was known in the BJP as a man gifted with immaculate organisational skills.

He had a long time association with the Rashtriya Swayam Sewak Sangh and shot into prominence in 2003 when he crafted the strategy leading to the defeat of chief minister Digvijay Singh.

Following this, Uma Bharti who became the chief minister, made him advisor to the CM.

As an NCC Air Wing Cadet he took his early flying lessons and found a lifetime passion. He was a holder of a private pilot licence and had once flown a Cessna aircraft around the banks of Narmada for 18 hours.

As Rajya Sabha MP, he has served as Member of Parliamentary Forum on Global Warming and Climate Change.

A post-graduate in Commerce from Gujarati College in Indore, Dave had keen interest in literature and had penned a number of books.

Dave was born to Pushpa and Madhav Dave at Barnagar, district Ujjain in Madhya Pradesh on July 6, 1956.

He inherited the legacy of the Rashtriya Swayamsewak Sangh from his grandfather Dadasaheb Dave and volunteered to be a Pracharak fter completing higher studies.

He rose in the Sangh echelons over the years and was deputed to the BJP, right before the Madhya Pradesh Assembly Elections in 2003.

The leader from Madhya Pradesh was key party strategist and served as chief of its election management committee for the three times during the state assembly elections in 2003, 2008 and 2013 and Lok Sabha elections in 2004, 2009 and 2014.

He was known for his booth-level management and planning.

Dave was elected to Rajya Sabha in 2009 and has been on various committees including Chairman, Select Committee on Prevention of Corruption (Amendment) Bill 2013.

Dave had also organised the World Hindi Conference in Bhopal and an international conference on the occasion of Simhastha (Kumbh) Mela in Ujjain.