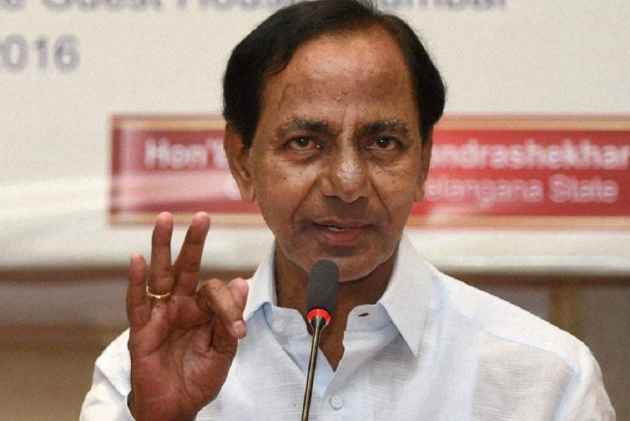 Telangana Chief Minister K Chandrasekhar Rao on Wednesday demanded an apology from BJP president Amit Shah for his remarks on the quantum of funds given to the TRS-ruled state by the Centre.

Rao offered to quit the chief minister's post if the figures provided by Shah were proved to be correct.

Questioning the veracity of the figures provided by Shah on the funds given to Telangana, Rao reeled out statistics on the amounts for various schemes the state had received from the BJP-led NDA government.

Shah, who was on a visit to Nalgonda district, in a press conference yesterday said the state had been given an additional amount of Rs 20,000 crore annually under various heads by the NDA government.

"Those remarks are baseless. There is a limit for patience and tolerance whether it is Amit Shah or any Shah, for KCR (as the CM is popularly called) Telangana is Badshah.

"We will not forgive anyone who tries to insult Telangana. I demand that Shah apologise to the people of Telangana for his false remarks," he said.

"These are unwarranted comments from a person who heads a party that rules this country," the CM said.

"Such statements are bound to hamper the progress of Telangana...KCR will never keep silent. I hope wisdom will prevail on him and he will set himself right," Rao, slamming the BJP chief.

Rao said Telangana has received Rs 67,390 crore under tax devolution and various central schemes till date from the Centre as its due share.

On the other hand, the state has contributed over Rs 1 lakh crore during the past three years to the central exchequer on account of Income Tax, Central Excise and Service tax collections, he said.

He also disagreed with Shah's observation that the TRS government had "failed" to implement the Centre's schemes at the grassroot level. Such comments would hamper investments in Telangana, he said.

"Shah says Telangana additionally gets Rs 20,000 crore annually (from the Centre). Mr Amit Shah should know what he is talking about. If figures given by me are wrong, I am ready to resign as chief minister," Rao asserted.

He advised Shah not to resort to "cheap political gimmicks" by falsifying facts and figures.

Rao, however, said he had great respect for Prime Minister Naredra Modi for running a "corruption-free" government at the Centre.

Replying to a query, he said his party TRS has not yet drawn its strategy for the upcoming presidential polls.

On Shah having lunch at SC colonies during his three-day visit to Nalgonda, Rao alleged the food the BJP leader had was prepared somewhere else and not at the residence of Dalits.

"We were informed that the members of Dalit community (in Theratpally village where Shah had lunch in SC colonies) expressed their displeasure over the issue," Rao claimed.

Mocking the BJP's claims that it would form the government in Telangana in the coming days, Rao said as per his latest survey the BJP would not be able retain even its present five seats in the Assembly.

On shifting of the state secretariat, Rao said there was proposal to construct one at Bison Polo Ground in Secunderabad, not at the historic Parade Grounds here, as reported in a section of media.