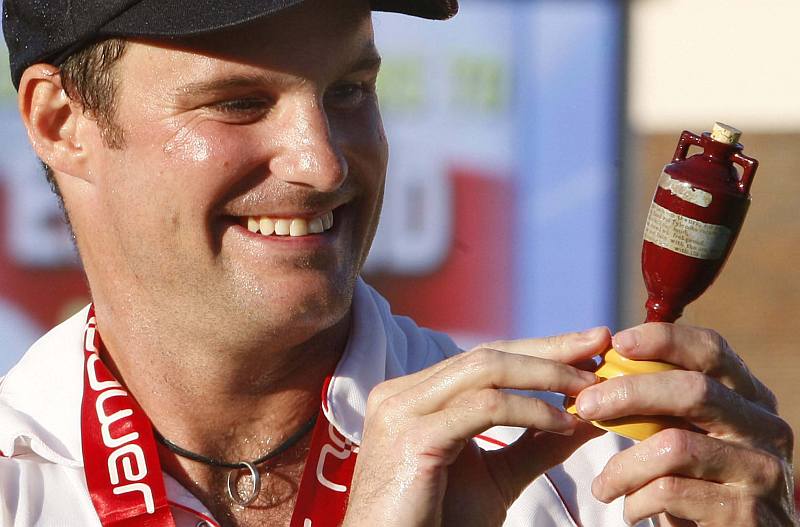 outlookindia.com
-0001-11-30T00:00:00+0553
England Test skipper Andrew Strauss today announced retirement from all forms of cricket with immediate effect, a decision which came amidst the controversies surrounding his strained relationship with controversial Kevin Petersen and his subsequent exile.

The 35-year-old Strauss took the surprise decision to quit cricket after a week's soul-searching during a family break in the aftermath of the 0-2 Test loss to South Africa which saw England being dethroned as the number one Test team.

He will be replaced as Test captain by Alastair Cook, who will also continue to lead the one-day international side

"After much thought over the last few weeks, I have decided to step down as England Test captain and announce my retirement from all forms of cricket," Strauss said in a statement.

"It has clearly been a tough decision to make, but I believe that it is both in the best interests of the England cricket team and myself to step down at this stage," he added.

Strauss made his England debut in a one-day international against Sri Lanka in 2003 and was awarded a Test cap a year later against New Zealand, scoring a century on debut.

He played 100 Tests for England and led the side in 50 matches. He scored 7037 runs in Test cricket and 4202 in 124 ODIs. His international career lasted 10 years, during which he scored 21 Test centuries and six ODI hundreds.

But his captaincy had come under the scanner after he struggled for runs in the series against South Africa which was also marked by the SMS episodes involving Petersen.

Petersen has been in exile since then for sending uncharitable text messages about Strauss and coach Andy Flower to South African players.

"There are too many people who have helped me on this incredible journey to mention them all by name, but I would like to thank all the Middlesex and England players I have played alongside, as well as the phenomenal coaches and support staff with whom I have been fortunate enough to work", he said.

"Particular mention has to go to Andy Flower and Duncan Fletcher in that regard. It would also be remiss of me not to thank Middlesex county cricket club, the ECB and the PCA for their support and guidance over the years," he said.

Strauss wished new Test captain Cook and coach Andy Flower good luck for the future game and said he will continue to follow the performance of the team.

"I am extremely proud of everything I have achieved as a cricketer, and I have found myself very fortunate to play in an era when some of English cricket's greatest moments have occurred.

"I have loved every minute of it and all that remains is for me to wish Andy, Alastair and the rest of the team the very best for the coming months. I will be an interested spectator," he said.

"On behalf of the ECB and everyone involved in cricket, I'd like to thank Andrew Strauss for his outstanding contribution to the game. Andrew has been a highly successful captain and opening batsman for Middlesex and England, who will be remembered for leading the side to two Ashes victories and to the top of the Test rankings.

"Andrew's calmness and authority when dealing with some of the most difficult moments in our sport in recent times should be applauded .... His legacy within the game will be felt for many years to come and we now need to continue to build on the progress we have made under his leadership."

New Test skipper Cook said, "He has been a fantastic captain, has led from the front for three and a half years and is a true ambassador for the game. To have played 100 Tests for your country is a phenomenal achievement and I want to congratulate him on a superb career."