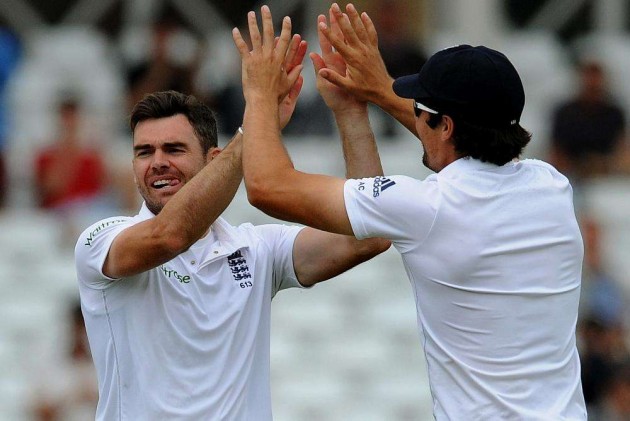 Former England skipper Michael Vaughan has not only defended pacer James Anderson in the Ravindra Jadeja incident but also suggested that the pace spearhead carry on with his sledging at Old Trafford without giving India any chance to report him again.

"At Old Trafford I would say to Jimmy carry on but don't give India an excuse to report him again. He is winning England the series and the political tension between the teams is high so he is vulnerable if he blows his top again and gets involved in a needless spat," Vaughan wrote in his column in The Telegraph.

Anderson was pronounced not-guilty in the alleged case of physical abuse against the Indian all-rounder by the ICC's judicial commission last Friday. The international board also rejected BCCI's review plea of the verdict, but Vaughan insisted that Anderson should be careful in his choice of words on and off the field.

"When you hear comments like Michael Clarke's to James Anderson in Brisbane last year or Jimmy calling MS Dhoni a "fat c---" then the umpires have to step in. Jimmy will know he was wrong and he will not want his name linked with those kind of words. He has young children and he will not want them reading those comments in years to come," said Vaughan.

England came back after the Lord's loss to draw level the five-match series in the third Test at Southampton. Man of the Match Anderson was the wrecker-in-chief, bagging seven wickets and Vaughan said that Mahendra Singh Dhoni and company will once again find Jimmy hard to handle.

"Dhoni will be reminded his technique is all over the place when facing Jimmy. England have Shikhar Dhawan on toast and as soon as he comes in, the slip cordon will be reminding him of his technical problems," opined Vaughan.

As the Pataudi series stands nicely poised, Vaughan, who led England to the 2005 Ashes triumph, said that sledging is part of cricket if you don't cross the line.

"Fast bowlers use this as a mechanism for getting up for the challenge and the fight and as long as it does not become personal abuse, I have no problem with it," he said.