Anandiben Patel Bows Out as Gujarat CM, Shah to Pick Her Successor 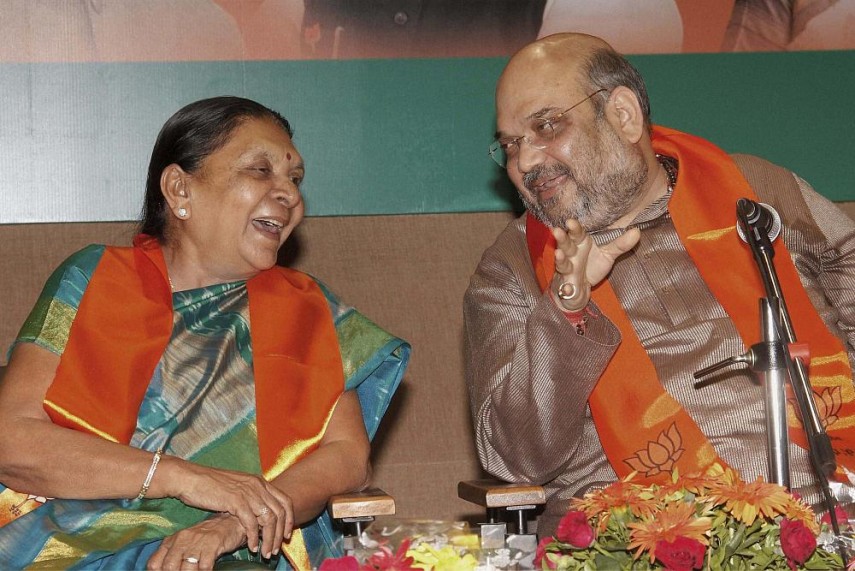 Print
A
A
A
increase text size
Outlook August 03, 2016 11:05 IST Anandiben Patel Bows Out as Gujarat CM, Shah to Pick Her Successor

Gujarat Chief Minister Anandiben Patel today submitted her resignation to Governor O P Kohli hours after the BJP Parliamentary Board accepted her offer to quit and authorised party president Amit Shah to pick her successor to lead the party in 2017 polls.

Anandiben, who will turn 75 this November, handed over the resignation letter to Kohli in the presence of ministers and party leaders at Raj Bhavan in the evening. Kohli has asked her to continue until the new cheif minister takes charge.

"Anandiben has submitted her resignation to the governor," state unit BJP president Vijay Rupani told reporters after coming out of Raj Bhavan.

Earlier in the day, the BJP Parliamentary Board which met in Delhi authorised Shah to pick Anandiben's successor after accepting her offer to resign.

The meeting of the Parliamentary Board, which was chaired by Shah and attended by Prime Minister Narendra Modi, appointed Union Minister Nitin Gadkari and BJP general secretary Saroj Pandey as party's central observers to hold consultations with the MLAs for electing the new leader.

Shah will be travelling to Gujarat tomorrow where he will hold consultations with party leaders and attend the Legislature Party meeting, likely to be held on Friday to elect the new leader.

Though her departure was anticipated, the first woman chief minister of Gujarat had offered to step down on Monday ostensibly due to her age, as she is turning 75 soon.

Meanwhile, the political circles are abuzz with the likey choice of her replacement.

According to leaders in BJP, the decision on Anandiben's successor could be taken within the next two days.

"We are yet to decide the time of the Legislature body meeting (to elect new leader) as state Observer Nitin Gadkari is busy. It (meeting) can happen any time after 3 PM tomorrow or even a day after. Our national president Amit Shah will decide it as he is arriving here tomorrow," said state unit BJP in-charge Dinesh Sharma.

He said the Legislature Party meeting to decide the next CM will be held in the presence of state Observers as per the process.

Parrying a query on likely contenders for CM's post, Sharma said, "A party worker will be chosen as next chief minister."

Interestingly, state unit BJP chief Vijay Rupani whose name is in the reckoning for the post besides others, virtually ruled himself out of the race, saying he would like to work for the party organisation.

"I have told the party leadership that I would like to work for the organisation," Rupani said.

Nitin Patel, who is considered to be the front-runner, said, "the party Central leadership will decide on who will be the chief minister."