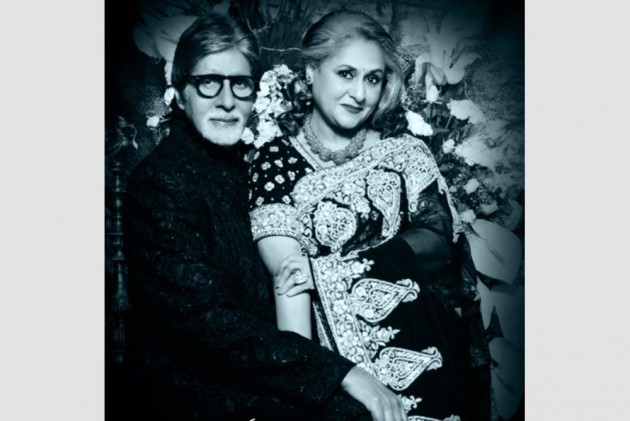 Megastar Amitabh Bachchan has thanked all his fans, whom he fondly calls extended family (Ef), for wishing him and wife Jaya on their 42nd marriage anniversary.

The 72-year-old actor -- who tied the knot on June 3, 1973 with the actress-politician -- said though Jaya is abroad on the occasion, they still feel very close to each other.

"Self wishes are the order of the day. They serve both ways. They convey to you the Ef, of my marriage anniversary... And they inform the wife that she has not been forgotten even though she is not in the country at this moment," Bachchan wrote in his blog.

The star couple got married after working together in Prakash Mehra's Zanjeer. Their wedding was a hush-hush affair with only a few of close industry friends and family members in attendance.

Bachchan and Jaya have two children -- Abhishek and daughter Shweta.

"After 42 years it all seems so very close and immediate. The decision to be together, the information to the elders. Parents first and then. .. Khwaja Ahmed Abbas, my first director and then Hrishikesh Mukherjee, Jaya's first director, and ours for many films thereafter," the Piku actor added.

Bachchan recalled his traditional Bengali wedding and their honeymoon in London.

"The hurried simple preparations, the ceremony in Bengali tradition, the drive from my rented place to the apartment of a dear friend of Jaya's family. My driver Nagesh insisting on driving me, sehra bound, to the site, not permitting my brother to do the honours.

"And finally after it was all over, the entrance of the bride into our home and the departure soon after to London with some dear friends for a honeymoon. Our very first visit to the UK," wrote Bachchan.