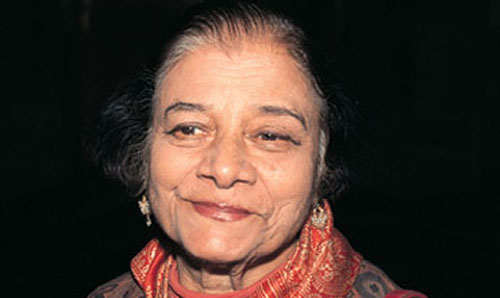 Amita Malik, the doyenne — often the stormy petrel — of Indian journalism, died in New Delhi, on Friday, February 20. She was suffering from leukaemia and was admitted to Kailash Hospital in south Delhi two weeks ago.

Born in Guwahati in 1921, her broadcasting career began when she joined All India Radio (AIR) as a casual staff in Lucknow in 1944 and moved to Delhi as a permanent employee in 1946. She wrote over the years on film and television in the Statesman, The Times of India, the Indian Express and, in the last years of her life, for the Pioneer.

Her autobiography, Amita, No Holds Barred, published around 10 years back, is as much a record of her personal life as of her professional career -- the title being an apt description of her personality and the way she wrote, though PC Chatterjee, reviewing it for Outlook had said "it errs on the side of caution":

Communal hatred plunged us into the holocaust of Partition. In this milieu, Amita married a Muslim whose family lived in Lahore and remained there. Her husband Iqbal Malik, resolutely secular, opted for India. Amita became a career woman which brought her into the limelight, while her husband in government service was required, according to the decorum of those days, to remain faceless. This raised tensions between them, especially because of the all-pervasive patriarchal system where the husband must needs be the dominant partner.

Amy and Iqbal's marriage lasted barely five years. Iqbal started to have prolific affairs, so she decided to leave and live separately. I find her account self-effacing to a fault. Though some things come through incidentally, there's no mention of the fact that whenever he was unwell he'd turn up to be looked after and leave the moment he was well. It was she who took him to hospital the last time and visited him daily. It was in her house that his body lay till the cremation. It's against this backdrop of emotional turbulence that her work as a professional journalist and film critic took shape.

Amita deserves a place among the historians of Indian broadcasting and her book is full of anecdotes. She tells the story of how Iqbal and an engineer were sent to Karachi to record the ceremony of handing over of power by Lord Mountbatten to Mr Jinnah on Pakistan's Independence Day. There being no radio station in Karachi the recording was to be transmitted to the Lahore radio station for broadcast. Despite every effort on the part of the Pakistani pro to stop him, Iqbal smuggled his way into the Constituent Assembly with the help of Col. Campbell Johnson, and the broadcast went off as planned. It was AIR's first gesture of goodwill to its still unborn counterpart, Radio Pakistan. This incident is not recorded anywhere else, including my own volumes on Indian broadcasting.

In Amita's autobiography you'll meet everybody who's anybody. They range from Nehru to whom she played hostess at the Press Club, to Indira Gandhi, whom she interviewed as PM; from MacDonald the British high commissioner and the birds in his garden, to Han Suyin of Love Is A Many Splendoured Thing. Among film stars, it's Devika Rani who's most lovingly portrayed. Then come the Indian and British editors she worked for.

I found none missing amongst the Indian editors. From Frank Moraes down to even Sunil Sethi (who started as her secretary and is now a rising star in the media). Of the British editors it's James Cowley of the Statesman who features most prominently (probably as he gave her her first job, the weekly column Listening Post, the first of its kind in India). It was Cowley who set her on the path to becoming India's leading film critic. Those were heady days for radio, TV and film. The National Programmes had started under the inspiring direction of Narayana Menon; Indian films were creating a stir internationally with directors such as Satyajit Ray, Mrinal Sen and Ritwik Ghatak.

That was ten years back, in 1999. Nine years later, she described those heady days to Outlook for its13th anniversary issue, when she talked about radio in its 13th year after India’s independence:

Those were radio days. In 1960, All India Radio was the only truly national organisation that reached and touched everybody. Ravi Shankar even composed the signature tune for AIR. The national programmes produced great concerts by great musicians. Every other Saturday, Hindustani and Carnatic musicians would play jugalbandis, bridging a gap that had existed for many long years.

The then IB minister, B.V. Keskar, restricted the playing of Hindi film music on AIR, so then Radio Ceylon swamped the airwaves with Binaca Geetmala—a hit parade of film songs—broadcast by Hameed and Ameen Sayani. Keskar had to allow film music back and the Vividh Bharati channel was created. TV was some years away—although the first experimental broadcast of Doordarshan took place in 1959, regular service only started by 1965. By 1967, TV was important enough that I hosted a show on it with Marlon Brando and Satyajit Ray.

In between, in 2000, she described her meeting with Salman Rushdie during his emotional India trip in her characteristic style:

And that’s when I made a classic gaffe. Looking at the burly, very tall, pink-cheeked, dark-haired young man sitting opposite me at the table, I whispered to Salman: "These British security men are really tough-looking, aren’t they?" A vastly amused Salman replied: "Oh, he’s my son."

From the 60s celebrities to the more recent times, her direct and personal style did not change. Take this TV column for the Pioneer in which she mourned the demise of Indian cricket captain Mahendra Singh Dhoni’s tresses:

“There was for me, the sad spectacle of Dhoni shedding his locks for a crew cut. We all remember that famous occasion in Pakistan when president Pervez Musharraf complemented Dhoni on his hairstyle and advised him not to cut his hair. His long locks have long been Dhoni’s own special identity and I was as hurt as his fans to find him unrecognisable with his crew cut.

“The rumour goes that one of the actresses, on whom he has a crush, asked him to trim his long locks. If this is true, all that I can say is: ‘Silly girl’.”

That's how she was, even well into her 80s.  As Sevanti Ninan recalls, "in her final years she licked leukaemia to continue writing till a month before she died. Just days before she took seriously ill and was hospitalised, she was spotted at the India International Centre bar. Amita Malik at 88 was far feistier than most of us will ever be at a much younger age".