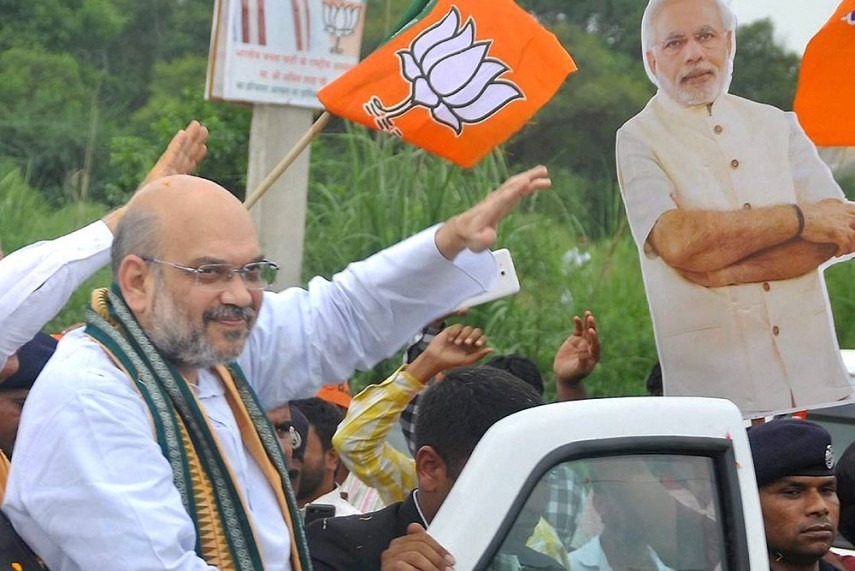 Shah, who is in Karnataka on a three-day visit to re- energise a faction-riven state unit, asserted that the party was ready for the electoral battle to win the assembly polls under the leadership of BJP state unit chief B S Yeddyurappa.

"Friends, our party stands united, and is geared up to take to the electoral battlefield under the leadership of Yeddyurappaji in coming days, and see to it that we form a BJP government in the state," Shah told party workers near the Kempe Gowda International Airport here.

Assembly polls in Karnataka are due early next year for which the party has a 150-plus seats goal to come back to power.

Shah is scheduled to interact with partymen at various levels and expected to give a pep talk to senior leaders to remain united, as the open bickerings between some of its leaders until recently had embarrassed the party.

Yeddyurappa has come under criticism from a section of partymen over his alleged "arbitrary style" of functioning with another senior leader K S Eshwarappa openly flagging the issue until both were told to shun open display of differences.

"I am hopeful that the way the party, for the last five years, has been fighting against the corrupt, oppressive and polarising rule of the Congress, the people of this great state of Karnataka have decided to vote the BJP to power," Shah said.

Addressing the party workers who gave him a rousing reception near the airport, Shah said he had come here to realise the goal of forming the next BJP government in Karnataka.

"I have come here amidst BJP workers to realise 'Ab Ki Baar, BJP Sarkar' (This time, a BJP government) resolution," he added.

He said when Prime Minister Narendra Modi's 'Vijay Rath' (victory chariot) would reach Karnataka in next February-March, party workers should be ready with their quest to make inroads into the southern India by winning Karnataka.

BJP's first ever government in the South had ruled Karnataka from 2008-2013 that saw internal fights leading to change of chief ministers thrice and paved the way for return of Congress to power.

The ruling Congress is going all out to retain power but BJP has said it has a counter-strategy to fight its "polarisation politics."

The BJP would neither interfere in the Lingayat religion issue nor use Kannada language row as a political tool to counter the "polarisation politics" of the Congress in Karnataka, senior BJP leader Suresh Kumar said.

The Congress support to a separate religion cause of Lingayats, the largest community in the state, ahead of the 2018 Assembly polls, is seen as an attempt to cause damage to the BJP, which enjoys considerable support from the community.

The BJP also does not want to use the language issue as a tool to create hatred towards other communities and sections of the people, Kumar said.

Huge protests were staged by pro-Kannada outfits over the use of Hindi on 'Namma Metro' signboards, which also had forced Siddaramaiah to write to the Centre stating the government was compelled to ask Namma Metro to temporarily re-design signboards in stations without the Hindi language following a row over its use.

Shah's visit is part of his 110-day nationwide tour to strengthen the party.

Tomorrow, he will take part in the Political Affairs Committee meeting of the party and visit Adi Chunchanagiri Math at Nagamangala in Mandya district and meet the seer, who is the religious leader of Vokkaligas, the second most powerful community in Karnataka.

On the third day, Shah will address party "vistaraks" (volunteers) who had fanned out across the state to get feedback from the people.