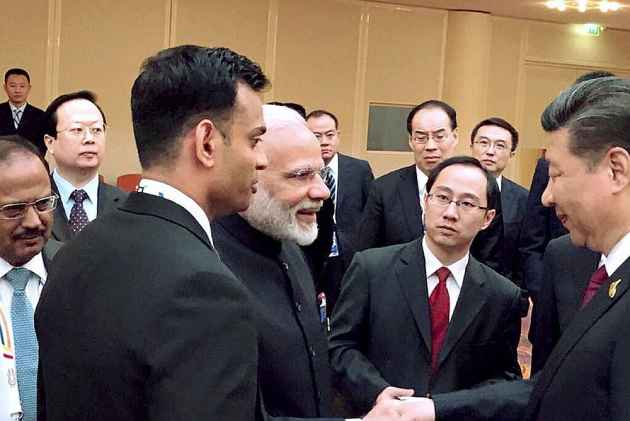 Chinese President Xi Jinping today urged the BRICS countries to push for "peaceful settlement" of regional disputes, amidst a standoff between India and China in Sikkim and Beijing's growing assertiveness in the disputed South and East China seas.

Xi made the remarks at an informal leaders' meeting of the BRICS, which groups Brazil, Russia, India, China and South Africa, ahead of a Group of 20 summit in the German port city of Hamburg, China's state-run Xinhua news agency reported.

The Chinese leader, who presided over the meeting, also called on the BRICS countries to "push for peaceful settlement of regional conflicts and disputes, and to consolidate the role of the G20 mechanism as the premier platform for international economic cooperation," the report said.

The Xinhua report did not elaborate on what Xi meant by "regional disputes".

The leaders, including Prime Minister Narendra Modi, pledged to work together for positive results at the BRICS summit in the southeastern Chinese seaside city of Xiamen later this year.

China and India have been engaged in a stand-off in the Dokalam area near the Bhutan tri-junction for the past three weeks after a People's Liberation Army construction party attempted to build a road. Doka La is the Indian name for the region which Bhutan recognises as Dokalam while China claims it as part of its Donglang region.

China is also engaged in hotly contested territorial disputes in both the South China Sea and the East China Sea. Beijing has built up artificial islands and militarised many of them.

Both the South China Sea and the East China Sea areas are stated to be rich in minerals, oil and other natural resources. They are also vital to global trade.

China claims sovereignty over all of South China Sea. Vietnam, Malaysia, the Philippines, Brunei and Taiwan have counter claims.

The US today said it has flown two bombers over East Asian waters, as tensions continue to run high in the region. The B-1B Lancers took part in joint military drills with Japan in the East China Sea, the US Air Force said in a statement. They bombers then flew over the highly contentious South China Sea.

The US had also recently sent a navy warship near an artificial island in the South China Sea as part of the first "freedom of navigation" operation under President Donald Trump.

China has previously termed the US' move as "irresponsible" and warned that America's deliberate provocations would have "extremely dangerous consequences" to regional stability.

Continue FREE with Ads Pay Rs. 1 to Read Without Ads
READ MORE IN:
Xi Jinping International
Next Story : JD(U) In Wait-And-Watch Mode After Lalu Lands Into Another Soup
Download the Outlook ​Magazines App. Six magazines, wherever you go! Play Store and App Store