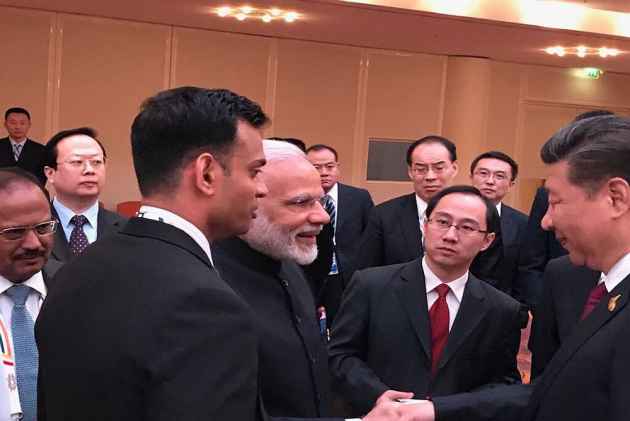 Prime Minister Narendra Modi and Chinese President Xi Jinping today shook hands and had a conversation on a "range of issues" during the BRICS leaders' informal meeting here amid a stand-off between the armies of the two countries in the Sikkim section.

The conversation took place on the sidelines of the G20 Summit that began here.

"At d BRICS leaders' informal gathering @ Hamburg hosted by China, PM @narendramodi and President Xi had a conversation on a range of issues," the spokesperson tweeted.

The ministry also tweeted a photograph of Modi and Xi shaking hands.

At d BRICS leaders' informal gathering @ Hamburg hosted by China, PM @narendramodi and President Xi had a conversation on a range of issues pic.twitter.com/ervZw46PH0

According to ANI, Modi today wished Xi and promised full cooperation with China.

The meeting assumes significance as it comes a day after a top Chinese official said the "atmosphere" is "not right" for a bilateral meeting between Modi and Xi Jinping on the sidelines of the G20 Summit.

China and India have been engaged in a stand-off in the Dokalam area near the Bhutan tri-junction for the past three weeks after a Chinese Army's construction party attempted to build a road. Doka La is the Indian name for the region which Bhutan recognises as Dokalam while China claims it as part of its Donglang region.

Modi urged leaders from the BRICS nations to show leadership in fighting terrorism and boosting global economy, even as he asked the G20 nations to collectively crackdown on terror financing, safe havens, "support and sponsors" of terrorism.

He also referred to the reforms carried out by his government, including implementation of the Goods and Services Tax (GST).

"BRICS has been a strong voice and needs to show leadership on terrorism and global economy", Modi said.

He emphasised that the G20 should collectively oppose terrorism financing, franchises, safe havens, support and sponsors.

Besides, he advocated a collective voice against the practice of protectionism, especially in the spheres of trade and movement of knowledge and professionals.

The BRICS leaders' meet also come amidst a standoff between the armies of India and China in the Sikkim section.

The G20 members, which include India and China, account for 80 per cent of the global economic output.