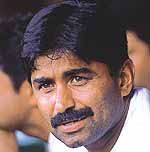 outlookindia.com
-0001-11-30T00:00:00+0553
Javed Miandad, whose son is married to underworld don Dawood Ibrahim's daughter, today cancelled his visit to Delhi in the wake of a raging controversy in India over giving him visa for the trip.

Former Pakistan captain Miandad, who was to watch the third and final ODI in Delhi, cancelled his visit to avoid a controversy, a PCB official said on condition of anonymity.

The official said the PCB did not want the focus to move away from cricket to other matters.

Ever since news came out that Miandad, whose son Junaid married the fugitive Mumbai don's daughter Mahrukh in Dubai in 2005, a controversy broke out in India over government giving him visa for the visit.

The Indian government, however, justified the decision saying Miandad was not on the 'negative list' of those not to be given visas.

BJP and Shiv Sena had yesterday lashed out at the Government for granting visa to Miandad, asking how allowing a person related to Ibrahim would help improve bilateral ties.

External Affairs Minister Salman Khurshid today said there are four categories of people who have been given visas.

Minister of State for Home R P N Singh had said, "He is a well known cricketer. His visa application papers were in order and valid and that is why the government has decided to give him visa."

There had been reports before a series in 2005 that a request for a visa by the batting great was turned down by the Indian government.