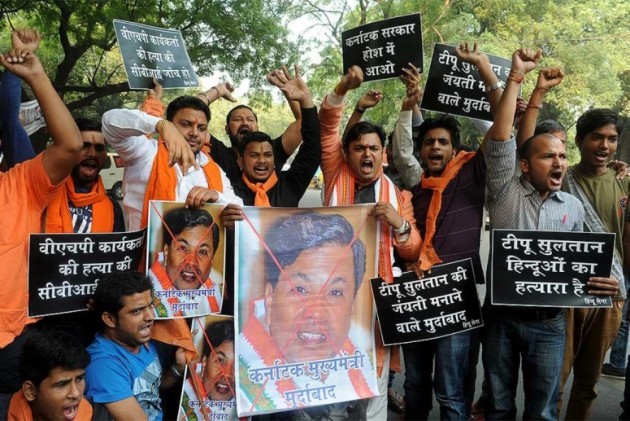 Amid state-wide protests by theBJP, the Karnataka government observed "Tipu Jayanti" in a low-key manner on Friday as Chief Minister Siddaramaiah said that the rival party opposed the event for political gains and narrow considerations and termed it as "religious fanatic".

The main event was held at Vidhana Soudha, the state secretariat.

The BJP observed the day as a "black day" and staged protests across the state with its leaders, including B S Yeddyurappa, courting arrests.

The party held protests in Mangaluru, Mysuru, Kodagu and other districts, against holding celebrations for the 18th century ruler of erstwhile Mysore kingdom who, it is said, was a "religious bigot" who "converted people to Islam and massacred many".

Security was beefed up across Karnataka with prohibitory orders in sensitive Mangaluru, Chitradurga, Shivamogga and Kodagu districts and central forces, including Rapid Action Force, and City Armed Reserve personnel being deployed in Bengaluru and elsewhere.

Hitting out at BJP leaders for branding a national icon as a religious fanatic, Siddaramaiah said, "We are celebrating Tipu jayanti for the second time. Our government did not decide to celebrate Tipu Jayanti for the sake of gaining votes, nor for appeasing Muslim community."

Speaking at Tipu Jayanti celebrations organised by the Department of Kannada and Culture, he said, "BJP, because of its narrow mind, is trying to project Tipu as anti-Hindu, anti-Kannada and as religious fanatic."

"You are doing this for politics, for your selfish gains," he added.

Accusing BJP, RSS and Bajrang Dal of trying to twist history, he said, "They are trying to do it for the sake of (next Assembly) elections. We will not fear it and disrespect public sentiment. We will celebrate Tipu jayanti every year, next year we will celebrate with more fanfare."

Congress government's decision to observe Tipu Jayanti since last year has stirred a major row, with opinion sharply divided among intellectuals, academia and various communities and organisations, which have differing views on his reign.

Last year's celebrations had led to violence in Madikeri and parts of coastal districts, resulting in two deaths.

Addressing a protest in Bengaluru, Yeddyurappa said BJP was not "anti-Muslim" but against celebrating Tipu Sultan against whom there was resentment among different sections of society across the state.

BJP leaders, including former Deputy Chief Minister R Ashok, who addressed the protest, said Tipu Sultan was "anti-Kannada" and a "religious fanatic" and the Congress government was trying to polarise people.

Defending his government's decision to celebrate Tipu  Jayanti, Siddaramaiah said it was unfortunate that prominent  personalities are being limited to the community they belonged to.

Calling Tipu a patriot and recalling his role in the four Anglo-Mysore wars, he said, "Tipu was determined to chase British out of this country. Several kings in our country surrendered to British rule, but he did not."

"I pray to god that he gives BJP good sense."

Yeddurappa said that within 24 hours of BJP coming to power, he will stop this Jayanti celebration.

Siddaramaiah asked Yedyurappa to remember what he had spoken at Tipu's tomb in 2012 when he praised him. "In the same breath he was now calling him anti-Hindu, a religious fanatic and anti-Kannada. You should be ashamed," he said.

He also recalled that another BJP leader Jagadish Shettar as Chief Minister had written the foreword to a book 'Tipu Sultan, a crusader for change', which was brought out by the Karnataka Gazetteer Department to commemorate the 150th year of the 1857 freedom struggle.

"You had then praised Tipu Sultan, now you are calling  him a religious fanatic. I don't know whether you have one  tongue or two. Why are you misleading people and trying to create friction in society for politics?" he asked.

Stating that it is now for the people to decide who is  doing politics on this issue, Siddaramaiah said attempts should not be made to mislead people as it may disturb public order and peace.

"When elections come people will vote and bless whom they want, but for sake of elections don't try to create friction in society. No one should do it," he said.

The CM also warned against any such attempts to disturb peace or law and order in the society and said the country does not belong to one particular community.

Continue FREE with Ads Pay Rs. 1 to Read Without Ads
READ MORE IN:
K. Siddaramaiah B.S. Yeddyurappa National
Next Story : Chants Of 'No Fascist USA' And 'Not My President' As Angry Americans Protest Trump
Download the Outlook ​Magazines App. Six magazines, wherever you go! Play Store and App Store