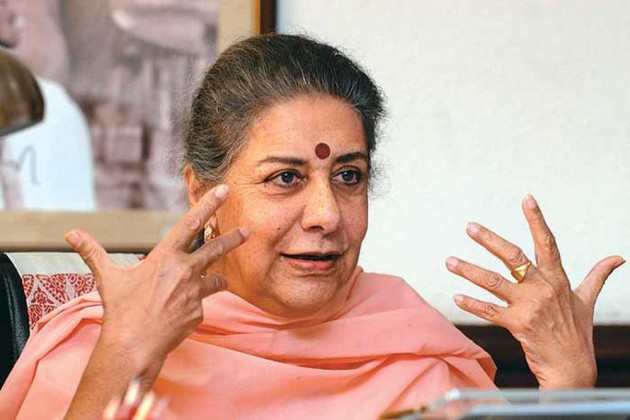 Delhi High Court today dismissed the pleas of Congress MPs Ambika Soni and Kumari Selja challenging government orders to evict them from large bungalows in Lutyens' Delhi, ruing that they had attempted to give "political overtones" to the matter.

Justice Rajiv Sahai Endlaw also termed as "suspect" the allotment of the bungalows to the Rajya Sabha MPs when there was a possibility that their party would not return to power after the 2014 general elections.

He said he was "sad to note" that the two MPs, "merely for the sake of retaining a house to which they are not entitled, have attempted to give political overtones to the matter".

"I may, however, hurry to add that in the present case, I am unable to find the action of the Directorate of Estates (DoE) to be wrongful. It has, as aforesaid, stood established that the petitioners in their capacity, as former Union Ministers and now Members of Rajya Sabha (RS), are entitled to a Type-VII accommodation and not to Type-VIII accommodation.

"Notwithstanding the same, the petitioners, just when the General Elections, 2014 to the Lok Sabha were being held, got allotted to themselves accommodations which were beyond their entitlement. ....

"I am constrained to observe that the allotment of prime houses at that stage, when the possibility of the political party of which the petitioners are members ceasing to be the ruling party, was on the anvil, is highly suspect," the judge said and imposed a cost of Rs 25,000 on each of them.

The court also said that even if the two MPS felt they were entitled to the said houses, they should have waited for the new government to come to power to stake their claim.

"The inference is that the petitioners (Soni and Selja), knowing that in the event of their political party not coming in power, they would not be able to stake their claim to the said houses, chose to get the houses wrongfully allotted to themselves from the DoE which according to them being under the control of Ministry of Urban Development (MUD), acts at the behest of the MUD," the court noted in its judgement.

The court in its 26-page verdict also said "it does not behove such Representatives of People to say that though the others are bound by the laws, rules and regulations framed by them but they themselves are not.

"Thus, looked at from whatever angle, there is no merit in the petitions, which are dismissed. The petitioners are also burdened with costs of Rs 25,000 each payable to the DoE within three months of today," the court said.

"Though the petitioners claim to be former Union Cabinet Ministers but they were admittedly at no time occupying the office, either of a Speaker of Lok Sabha or of a Governor of a state or of Chief Minister of a state.

"The ASG is right in contending that entitlement to Type-VIII accommodation is only of such a Member of Rajya Sabha who in the past has been, not only a Union Cabinet Minister but also either a Speaker of the Lok Sabha or a Governor of a state or a former Chief Minister of a state," the court said.

It also said that a Rajya Sabha member who in the past has held the position only as a Union Cabinet Minister, is entitled to Type-VII accommodation only.

The court also expressed sadness over Soni and and Selja's contention that they were not bound by the Handbook for Members of Rajya Sabha, "on which they themselves placed reliance".