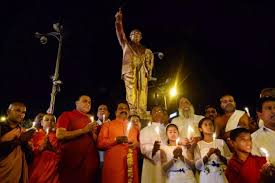 Police today lodged a case against unidentified miscreants after the statue of B R Ambedkar at a park in Sarfabad village here was allegedly vandalised last night.

The damaged statue was noticed by some members of Dalit community today. Agitated by the incident they informed the police, DSP Sandeep Singh said.

An FIR has been lodged at Sector 49 police station against unknown persons under sections 153 A and 427 of the Indian Penal Code (IPC), he said.

Meanwhile, the Greater Noida District Magistrate asked the police and district officials to find a new place in Dankaur area to put a statue of Ambedkar after it was removed following clashes two years ago.