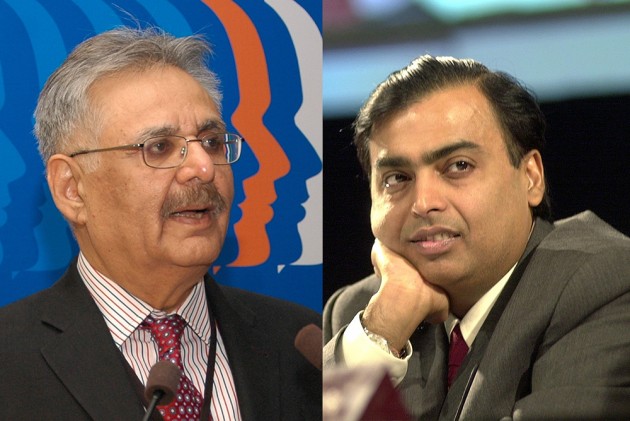 Billionaire industrialist and India's richest Mukesh Ambani has not taken a pay hike for seven years, but his salary is over 205-times that of the median employee remuneration at Reliance Industries Ltd (RIL).

However, this ratio stands much higher at 439 times in case of ITC Ltd Executive Chairman Y C Deveshar.

The same ratio stands much lower at 89-times in case of IT major Wipro's Chairman and Managing Director Azim Premji, and just at 19-times for mortgage giant HDFC's Chairman Deepak Parekh for the latest fiscal 2014-15.

For IT giant Infosys' CEO Vishal Sikka, his pay was 116 times of the median employee pay at the company. The same ratio for HUL's CEO Sanjiv Mehta was 93 times, but much higher at 293 times for Vedanta Limited's Chairman Navin Agarwal.

Listed companies have begun disclosing these ratios, as also other comparisons such as salary hikes for the top management personnel and an average staff, for the first time pursuant to the new Companies Act and SEBI's latest Corporate Governance Code coming into force.

While a majority of the companies are still in the process of disclosing these details, the disclosures made so far by the top companies show a wide variance in these ratios, while there is also a huge difference between the pay hike figures for the top management personnel and an average staff member in many cases.

However, there are a few cases where the increase in the median employee remuneration is almost equal or even higher than the same for the CEOs and other key management personnel.

In case of Wipro, Premji saw his pay decline by 53 per cent to Rs 4.78 crore, while Median Employee Remuneration rose by 9.5 per cent. Wipro CEO T K Kurien got a pay package that was 170 times of the median employee remuneration, while he got a hike of 39 per cent.

At HDFC Ltd also, Vice Chairman and CEO Keki Mistry's remuneration was 83 times of the median employee pay, while the same for Managing Director Renu Sud Karnad was 77 times.

The remuneration rose by 15 per cent for both Mistry and Karnad, while the increase in the median remuneration of employees in fiscal year 2014-15 stood at 16 per cent.

At HDFC Bank, Managing Director Aditya Puri saw his remuneration rise by 15 per cent, while the percentage increase in the median remuneration of the employees in the same financial year was 8.26 per cent.

In case of Axis Bank also, chief Shikha Sharma saw her remuneration rise by 15 per cent, while median employee pay increased by 6.16 per cent.

ICICI Bank said the percentage increase in the median remuneration of its employees in the financial year was around 5 per cent, while the same for CEO Chanda Kochhar and for its CFO, whole-time directors and Company Secretary, ranged between 12 per cent and 15 per cent.

Among other companies that have so far disclosed these details, Infosys saw its median employee remuneration decline by 5.2 per cent, while "the aggregate increase in the salary for Whole Time Directors and other Key Management Personnel was 57.7 per cent in the fiscal 2014-15" over the last fiscal.

CEO Sikka himself joined during the fiscal 2014-15 itself and therefore there was no comparable figure for the previous year.

At HUL, Managing Director and CEO Sanjiv Mehta saw his remuneration dip by 2.9 per cent, while the company said the percentage increase in the median remuneration of employees for the financial year was 4.55 per cent.

In case of Vedanta Ltd, the increase in remuneration stood at 9 per cent for Chairman Navin Agarwal and at 15 per cent for Whole Time Director Tarun Jain. The median remuneration of the employees in the financial year rose by 11.20 per cent.

SEBI has asked listed companies to make these disclosures as part of its new Corporate Governance Code, which came into effect from October last year. Accordingly, the companies have begun making these disclosures in their annual reports for the last fiscal 2014-15.

The new Code is aimed at bringing in a greater alignment of CEO salaries with the performance and goals of the company, while requiring disclosure of ratio of remuneration paid to each of their directors and their median staff salary. Similar provisions have been made in the new Companies Act.

These norms came into effect after SEBI found that "on average, the remuneration paid to CEOs in certain Indian companies are far higher than the remuneration received by their foreign counterparts and there is no justification available to that effect".