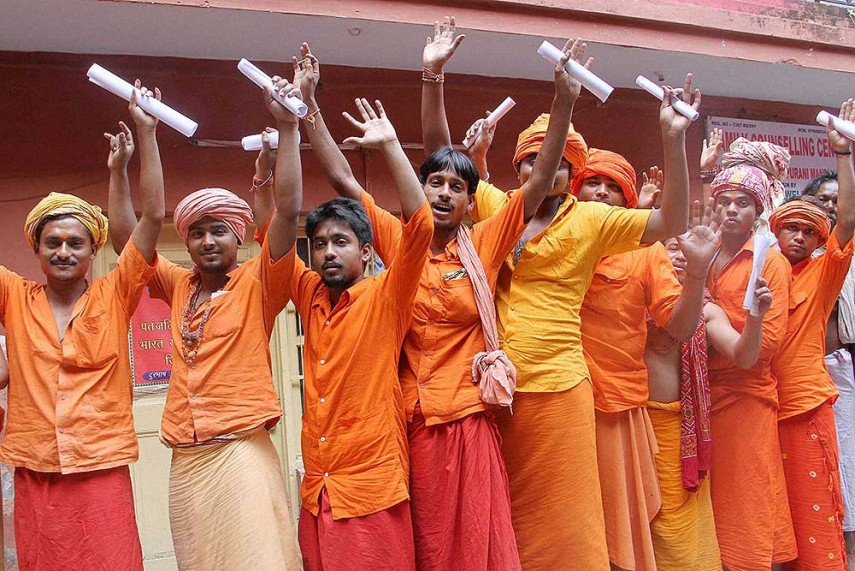 The 48-day annual pilgrimage to the Amarnath shrine in south Kashmir Himalayas ended today, coinciding with the festival of Raksha Bandhan, with over 2.20 lakh pilgrims offering prayers to the naturally formed ice- shivlingam despite the ongoing unrest.

This year's figure is the lowest in the past decade.

The holy mace of Lord Shiva popularly known as 'Chhari Mubarak', carried by a group of sadhus and devotees led by its custodian Mahant Deepindra Giri, arrived at the holy cave in the wee hours for the day-long prayers, officials said.

The group of sadhus and devotees trekked 42 kilometres from Pahalgam to reach the cave shrine with night halts at Chandanwari, Sheshnag and Panchtarani.

After traditional rituals at the sanctum sanctorum, the holy mace would start the return journey before dusk today.

While officially the yatra ended today, 'pujan' and 'visarjan' (immersion) ceremonies for the journey of 'Chhari Mubarak' would be performed on the banks of Lidder river in Pahalgam on August 20. It will be followed by a traditional open kitchen, the last ritual of the pilgrimage.

The holy mace would return to its abode at Amareshwar temple at Dashnami Akhara here the same day, the officials said.

The yatra had commenced from Pahalgam and Baltal routes amid strict security arrangements on July 2, a week before protests erupted in the Valley following the killing of Hizbul Mujahideen commander Burhan Wani by security forces on July 8.

The unrest has left 64 people, mostly young boys, dead and over 8,000 injured.

Twenty-nine people -- 21 pilgrims, a sage, three sevadars (community kitchen workers), two local Muslims and as many paramilitary troopers -- died during the yatra after suffering cardiac arrest, while 40 yatris and 10 local Muslims were injured after falling from steep slopes, the officials said.

A pilgrim and a Muslim driver were killed when a yatra bus collided with a truck near Bijbehara on the Srinagar-Jammu national highway on July 13. Muslim villagers had defied curfew to save the lives of the injured pilgrims.

Setting an example of communal harmony and brotherhood, the residents had also offered free meals to the pilgrims at various places including Nigeen Club and TRC in Srinagar during the yatra.

Despite the law and order problem, the number of pilgrims crossed the two lakh mark on July 24. But the arrivals declined after that, with over 20,000 pilgrims paying obeisance in the last 25 days. Early melting of the ice- shivlingam was one of the reasons for the decline in the number, the officials said.

In 2008, when Jammu and Kashmir witnessed protests in the wake of the Amarnath land row, a total of 5.33 lakh pilgrims joined the yatra, followed by 3.81 lakh in 2009 and 4.55 lakh in 2010, when the Valley faced violent agitation over alleged human rights violation.

This year, most of the pilgrims preferred the shorter Baltal route in Ganderbal district of central Kashmir over the traditional Pahalgam route, the officials said.