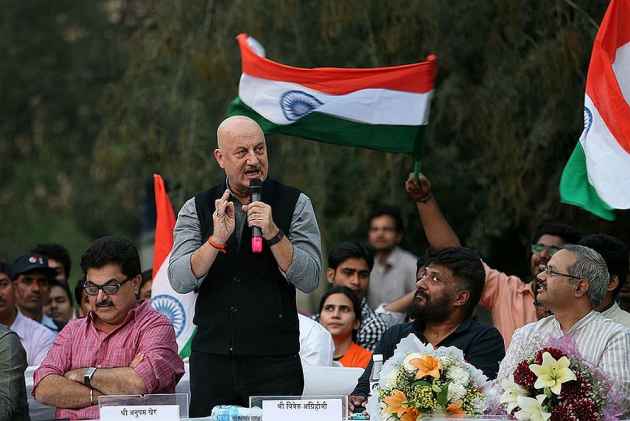 Veteran actor Anupam Kher has expressed anguish over the killing of seven people in the terrorist attack on Amarnath Yatra pilgrims in Jammu and Kashmir's Anantnag district.

In a series of tweet, the actor, who often raises his voice on Kashmir issues, said, "It is high time we stop being diplomatic and defensive. Killing of innocent people should be dealt with total force."

Kher also extended his heartfelt condolences to the families of the victims of terrorist attack.

Dubbing the attack as shameful and cowardly act, he said the security forces should wipe out the terrorists at the earliest.

Meanwhile, veteran filmmaker Ashok Pandit said the attack was not an act of terrorism but of war.

"We are tired of crying, burning candles, condemning killing of Hindus in Jammu and Kashmir. I would like to very openly say that this is not an act of terrorism but of war. It is high time to realise this undeclared war. I hail all those pseudo liberals politicians who want to go and hug the Hurriyat leaders because they are responsible for this killing," Pandit told ANI.

He further appealed to the government to arrest the people who were supporting terrorist in Kashmir.

At least seven people were killed and 15 others injured on Monday after terrorists opened fire at bus ferrying Amarnath Yatra pilgrims in Batingoo near Anantnag district.

The attack occurred at Batingoo at about 8.20 p.m. on Monday evening when 60-70 pilgrims were returning from Baltal, one of the base camps of the pilgrimage, to Jammu. (ANI)