Amarinder Says No Impact Of Demonetisation On Terror Funding 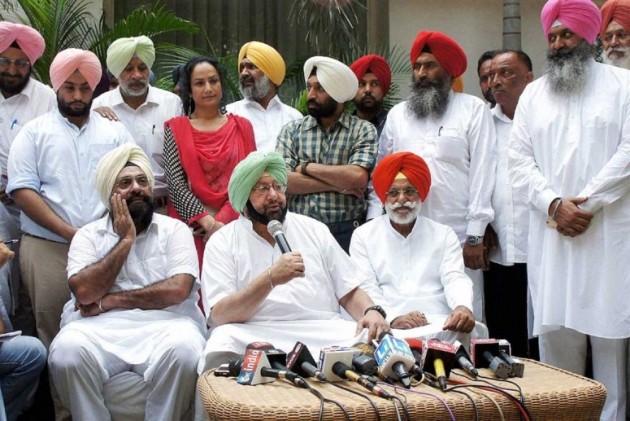 Print
A
A
A
increase text size
Outlook November 23, 2016 18:36 IST Amarinder Says No Impact Of Demonetisation On Terror Funding

"The recovery of the new Rs 2000 notes from the body of the slain terrorist, killed in Bandipora on Monday, has completely nailed Prime Minister Narendra Modi's lies on demonetisation," he said in a statement as Congress party organised a state-wide protest today to protest the Centre's demonetisation move.

Capt Amarinder, who has issued directions to all district and block presidents of the party to come out on the streets in protest against Modi's "irrational" demonetisation move, lashed out at the prime minister for allegedly putting the people of the country to extreme hardship on the pretext of putting an end to terror funding from across the border.

"So how has demonetisation stopped terror funding, if terrorists are entering from across the border with new notes, which even the people of India are finding difficult to procure," he asked the prime minister.

Meanwhile, acting on the directive of Amarinder, Punjab Congress workers across all districts, led by the respective district presidents, launched protest demonstrations in the state on the issue of demonetisation.

Shouting anti-Modi and anti-demonetisation slogans against the move, which as per protesters had brought lakhs of people around the country to the brink of disaster and also claimed scores of lives, the Congress workers, also joined by MLAs and block presidents, went around various banks, especially the cooperative banks in the remote areas.

Protest marches were held in every district with the party workers and leaders going through the bazaars in each district, demanding immediate withdrawal of the irrational and absurd scheme, a party spokesman said.

The protesters reached out to people queued up outside banks for hours to get a mere pittance of their own savings out in order to survive for the next day or two.

At the cooperative banks, which have been barred by the Reserve Bank of India (RBI) from exchanging/accept old notes, they met farmers and villagers who have no access to other banks and are left with no cash to feed themselves and their families, PPCC general secretary Sandeep Sandhu said.

The Congress leaders assured the hapless people of all possible help to minimise their woes and said they would continue to provide assistance in filling out forms and through tea and water provision outside banks and ATMs as part of the party’s nationwide programme to ease the problems of the common man suffering the impact of Modi's ill-managed demonetisation policy.