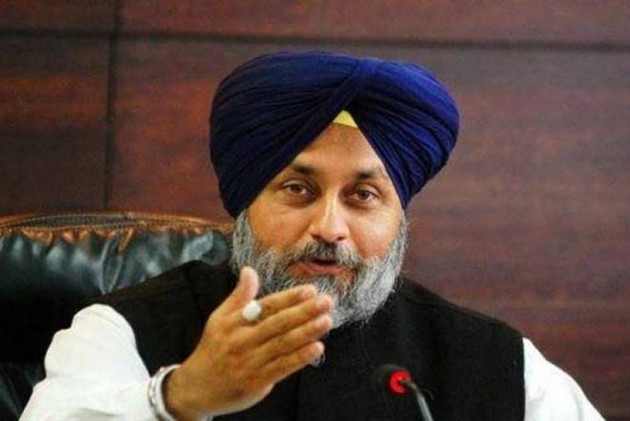 Punjab Deputy Chief Minister Sukhbir Singh Badal on Sunday alleged that state Congress chief Amarinder Singh was "playing into the hands of anti-national forces" by levelling "wild and malicious" accusations against the ruling SAD-BJP combine in the state, instead of rallying with the government to corner and confront such forces.

"I understand your (Amarinder's) frustration. Your career graph is on the downhill for 10 years. Even now, you have been cornered in your party by the senior leadership which has even forced you to change your political decisions," he claimed.

"All this, however, does not mean that you lose stability of mind and make wild statements such as the government wants to use terrorists and gangsters in the forthcoming (Assembly) elections," Sukhbir said.

"You have been out of the state mostly, but Punjabis know that it is the SAD-BJP government which dealt a death blow to 'gangsterism' in the state and put all of them behind the bars. Our stand on terrorism is clear. We will not allow Pakistan to create any disturbance in Punjab by using terrorist organisations and their sympathisers," he added.

The Shiromani Akali Dal (SAD) chief said the people of the state were aware that he had already briefed National Security Advisor Ajit Doval on the Nabha jailbreak incident even as Punjab Police had announced a Rs 25 lakh reward for information on the culprits.

They were also aware that a special team was constituted both at the police and civil level to get to the bottom of the "conspiracy", he added.

In the light of these facts, it did not behove Amarinder to "politicise" such a sensitive issue with "cheap theatrics", Sukhbir said.

"Any senior politician or statesman would have stood with Punjab and Punjabis at this crucial juncture. But, it seems that you have been so blinded by the lust of power that you are unable to see the welfare of your own people and do not want to stand up and be counted with those who are against terror and terrorism," he added.

Continue FREE with Ads Pay Rs. 1 to Read Without Ads
READ MORE IN:
Sukhbir Singh Badal Amarinder Singh National
Next Story : Every Penny Of My NGO Is Accounted For: Zakir Naik
Download the Outlook ​Magazines App. Six magazines, wherever you go! Play Store and App Store