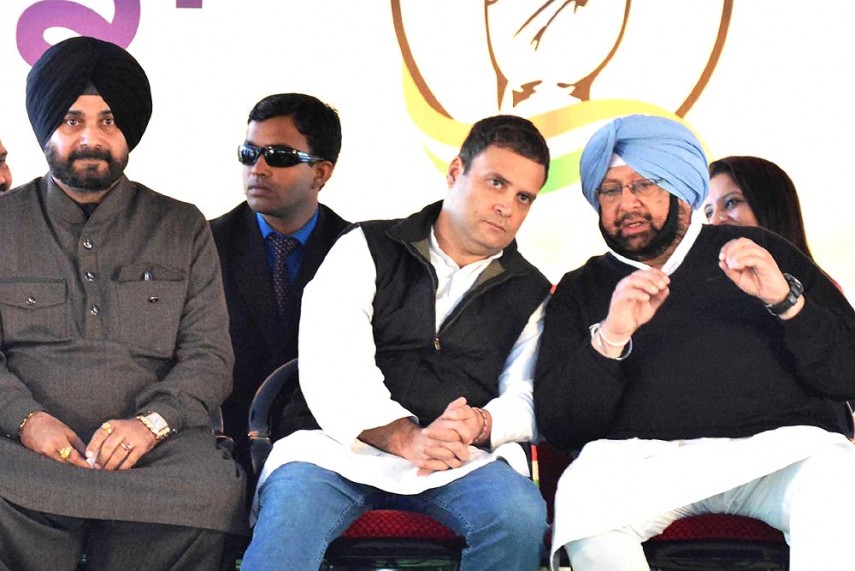 After steering the party to a stupendous victory in Punjab, state Congress chief Amarinder Singh today met Rahul Gandhi and discussed issues relating to government formation in the state.

The two leaders met for around half an hour and exchanged notes. The sources said that the party would finalise plans for government formation in a day or two.

"Today was a courtesy call. We will think and myself and our AICC secretary incharge will sit together and prepare a list. Then, we will come again.... We will then discuss the government formation with our party leadership," Amarinder said after the meeting.

The Congress Vice President also said after the meeting, "Met Amarinder Singh ji earlier today. I am confident that Punjab will once again rise to its true potential under a Congress government."

Amarinder also credited every worker and the party's top leadership for the party's performance in Punjab. The Congress has returned to power after a gap of ten years when it was defeated consecutively by the Akali-BJP combine.

The Punjab Congress chief, who was earlier the deputy leader of Congress in Lok Sabha, was highly critical of the BJP forming governments in Goa and Manipur despite emerging as the second largest party.

"It is unfair if you break parties and make governments forcibly. This is use of unfair means. You are violating the mandate of people. If by putting together independents, you stake claim to form a government, this is violation of the mandate," he said.

Asked if Congress victory in Punjab was an answer to BJP's "Congress-free India" slogan, he said, "I think so. Yes." He said the party had not only performed well in Punjab, but also in Goa and Manipur.

Amarinder said AAP was never a threat to Congress in Punjab and it merely created a hype on the social media while trying to influence voters as well as journalists.

"The AAP was never a threat. AAP used the social media effectively. They created a hype which was broken," he said.

To a question on demand by AAP for holding a probe into the functioning of EVMs, he said, "The one who loses will make some excuses" as he debunked charges of EVM tampering.

Continue FREE with Ads Pay Rs. 1 to Read Without Ads
READ MORE IN:
Amarinder Singh Rahul Gandhi National
Next Story : After Mayawati, Kejriwal Says 'No' to EVMs, Seeks The Use Of Ballot Papers In Upcoming Civic Body Polls
Download the Outlook ​Magazines App. Six magazines, wherever you go! Play Store and App Store