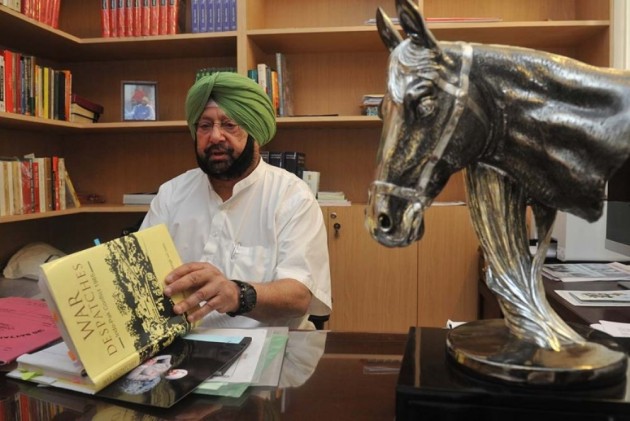 Lambasting the Badal government for allegedly misusing public funds and official machinery to put up large hoardings carrying an old Congress advertisement released at the time of the SYL foundation laying ceremony in early 1980s, Amarinder again demanded immediate imposition of the Model Code of Conduct and early elections in the state.

He also demanded holding the Assembly elections in the state under President's Rule.

Accusing the Akalis of unleashing false propaganda over the SYL issue, he warned that they would get caught in their own web of deceit.

"The people of Punjab are tired of your lies and deceptive statements and claims, and are not ready to believe a word of it," said the Punjab Pradesh Congress Committee (PPCC) president in a statement here.

Lashing out at the Badals for spending the precious resources of the state on "fraudulent and misleading campaigns", Amarinder said "the hoardings, that had been put up across Mohali, were clearly in violation of the MC rules as well as the Punjab and Haryana high court directions against putting up hoardings at traffic lights."

Demanding immediate and stringent action by the Election Commission, Amarinder said "the hoardings reflected the twisted mindset of the Badals, who were ready to stoop to any level to divert public attention from their own misdeeds by resorting to all kinds of frauds and falsehoods".

Amarinder accused the Badals of spreading one lie after another to mislead the people of Punjab on the SYL issue, "in which they themselves were the biggest culprits, having shamelessly and brazenly sold off the interests of the state to neighbouring Haryana."

"There is enough documentary evidence on record to show that Chief Minister Parkash Singh Badal had been instrumental in acquiring land for SYL construction in Punjab through a notification dated February 20, 1978," he claimed.

"Having failed to protect the rights of Punjab in the SYL court case all these years, the Badals are now desperate to compensate for their resultant political loss by trying to shift the blame on the Congress," said Amarinder.

Amarinder pointed out that he had never denied welcoming then Prime Minister Indira Gandhi to the SYL foundation laying ceremony in 1982, since, as an MP, it was his responsibility to do so.

The mere fact of welcoming the prime minister on account of his parliamentary office, in no way, amounted to supporting the SYL, said Amarinder, pointing out that he had, in fact, brought in the Punjab Termination of Water Agreements Treaty to protect the interests of the state.

Notably, Amarinder, the Congress' Deputy Leader in the Lok Sabha, on Wednesday met Lok Sabha Speaker Sumitra Mahajan and tendered his resignation from the House.

He had earlier announced his resignation to protest the "injustice" meted out to the people of Punjab following the November 10 Supreme Court verdict on the Sutlej-Yamuna Link (SYL) canal water sharing agreement which, he and most other state leaders have been opposing.

The SYL agreement has become a major political issue in the poll-bound state in which Amarinder is leading his party's campaign to capture the power from the SAD-BJP alliance, which has been ruling for a decade.

He had said that he decided to quit the Lok Sabha "as a mark of protest against the deprivation of the people of my state of the much-needed Sutlej river water."