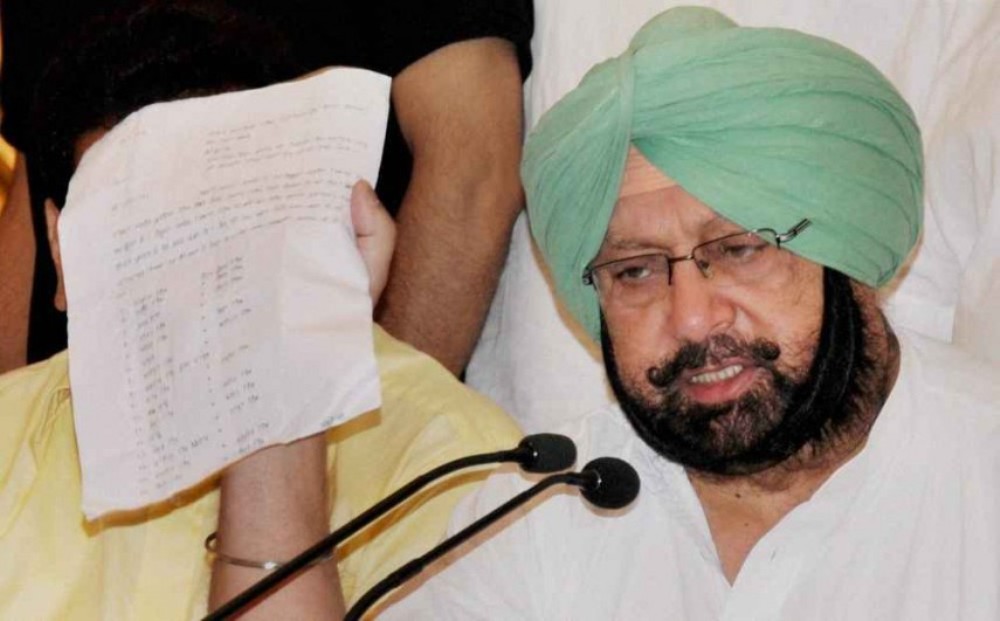 After the Supreme Court announced its verdict on the SYL water sharing agreement, Punjab Congress president Amarinder Singh today resigned from his Lok Sabha seat while his party MLAs resigned en-masse from the state assembly, "in protest against the injustice meted out to the people of the state".

Amarinder, who is also former Punjab Chief Minister, has sent his resignation to the Lok Sabha Speaker, copy of which was released to the media here, and has also sought a personal meeting with the Speaker next week.

The party MLAs have also sent their resignations to the Speaker, Punjab Assembly, and will meet him tomorrow morning to personally hand over their papers.

In his resignation letter, Captain Amarinder said he had decided to quit as member of the 16th Lok Sabha from Amritsar constituency in Punjab with immediate effect "as a mark of protest against the deprivation of the people of my state of the much-needed Sutlej river water."

Describing the SYL judgement by the apex court as a "major blow to the people of Punjab," Amarinder said here he had always fought for their legitimate right on this issue and continues to stand by them at this critical juncture in the state’s journey.

Blaming the Akalis squarely for bringing the people of Punjab to this pitiable situation, where they faced imminent devastation due to acute water scarcity, Amarinder said Badal and his team had "failed" to defend Punjab’s stand in the court, leading to such disastrous consequences for the state.

"The Akalis let down the people of Punjab on this critical issue, selling off their interests to Haryana," said Amarinder, accusing the Badal government of promoting its "vested political interests at the cost of the interests of the state."

"Badal has done to Punjab what even its worst enemy could not have done. He has plunged Punjab into a state of total despair," said Amarinder, declaring that the people of the state will not forgive the Akalis for playing with their lives.

The Akali-BJP government, Amarinder Singh, alleged had gone all out to scuttle every move of the Congress to bring relief to the people of Punjab in the SYL matter. (REOPENS DEL 64)

Amarinder claimed that the then Congress government headed by him had tried to "protect Punjab’s interests through the Punjab Termination of Agreements Bill, 2004".

"The Badals never had the interests of the people of Punjab at heart, as is evident from the way they have handled the issue all these years. The theatrics they are now indulging in, by demanding royalty for water-sharing and asserting that they would not allow a single drop of water to leave Punjab, are not going to save Punjab’s citizens," he said.

"On the contrary, the preposterous idea floated by Chief Minister Parkash Singh Badal to seek royalty from other states using Sutlej water would be even more detrimental to the interests of Punjab, since it was itself using water receiving from neighbouring Himachal Pradesh.

"After helping out Haryana, it seems Badal is now trying to help Himachal Pradesh, by suggesting that it should demand royalty from Punjab," said Amarinder.

Accusing the Akali leader of shamelessly showing dual standards in the matter, the PPCC chief alleged that the Akali government in Punjab was responsible for putting the state on the back foot on the SYL issue.

"Badal had been instrumental in acquiring land for SYL construction in Punjab through a notification dated February 20, 1978, and taking money from Haryana, thus weakening Punjab’s position in the prolonged dispute," he said.

Subsequently, he said, "Badal wrote to Haryana government vide letters..Demanding payment of Rs 3 crore more as he had already taken Rs 2 crore for the purpose. This was in follow up to an agreement between him and Devi Lal, the then Chief Minister of Haryana that Haryana will pay Rs 5 crores to Punjab."

The PPCC president said that this was acknowledged by Devi Lal in the Haryana Vidhan Sabha on March 1, 1978, "where he proudly claimed that it was because of his personal relationship with Badal that he had convinced him (Badal) for land acquisition for the SYL".

"For personal relationship with Devi Lal, Badal put Punjab’s interests at stake," alleged Captain Amarinder. (MORE) The Punjab Congress president also claimed "not only did Badal acquire land to please his friend, Devi Lal, he had also decided to hold a function where he would lay the foundation stone and Devi Lal would preside over that function".

The PPCC president further alleged that Badal had "failed" to uphold the sanctity of the Punjab Termination of Agreements Act, 2004, which was passed to annul all inter-state water sharing agreements signed by Punjab in 2004.

Amarinder alleged that the NDA, of which Badal’s Shiromani Akali Dal is a part, "took an anti-Punjab stand during the hearing on the Presidential Reference pertaining to the Punjab Termination of Agreements Act, 2004, laying bare the hypocrisy of the Badals in this whole affair."