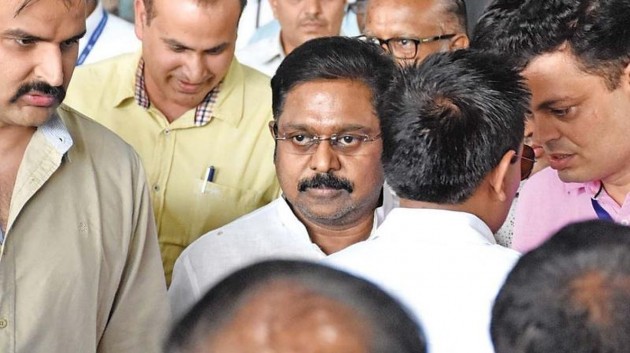 An alleged hawala operator was arrested here today in connection with the Election Commission bribery case in which three persons, including AIADMK (Amma) leader TTV Dhinakaran, were in police custody.

Naresh was apprehended at the Delhi Airport for his alleged involvement in "illegal transfer" of money to arrested middleman Sukesh Chandrasekhar by Dhinakaran, said a senior police officer.

Praveer Ranjan, joint commissioner of police (crime), confirmed the arrest but did not elaborate.

Yesterday, Dhinakaran was taken to Chennai and searches were conducted at his residence in the city as part of the probe.

Delhi Crime Branch police personnel led by Assistant Commissioner Sanjay Sherawat searched the residences of Dhinakaran and that of his associate Mallikarjuna, who has also been arrested.

Police had secured warrants from a Delhi court to conduct the searches as part of efforts to gather "further evidence" in the alleged attempt by Dhinakaran to bribe EC officials.

However, it is not known whether any seizures were made.

Besides the two, others connected to them were also questioned over "illegal channels" and "conduits" used for sending money to Delhi from here.

Dhinakaran was arrested on April 25 night here following four days of questioning for allegedly attempting to bribe an unidentified EC official to get the undivided AIADMK's 'two leaves' election symbol for his faction.

Police had earlier said Sukesh Chandrasekar, who was the first to be arrested, had struck a deal for Rs 50 crore to help the AIADMK (Amma)faction keep the two leaves symbol.

Police are also verifying whether Chandrasekar had approached any EC official for getting a favourable verdict for Dhinakaran's faction.

Dhinakaran, who was appointed deputy general secretary by jailed AIADMK chief V K Sasikala, is facing a revolt by an influential section of state ministers who have decided to keep the two out of party affairs.