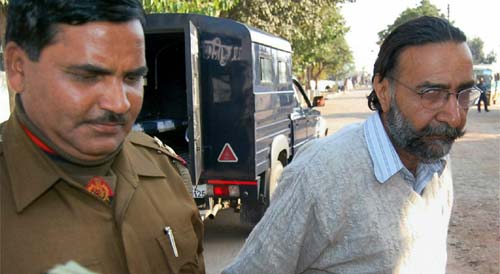 "The depraved and brutish acts of Koli call for only one sentence and that is death sentence. We agree with the reasoning of the sessions judge awarding death sentence and affirm the same awarded to Koli," the bench observed.
File Photo

outlookindia.com
-0001-11-30T00:00:00+0553
Businessman Moninder Singh Pandher, whose house in Noida was the scene of horrific rape and killings of several young girls and women nearly three years ago, was today acquitted in one of the 19 cases by the Allahabad High Court which, however, upheld the death sentence for his domestic help Surinder Koli.

The verdict was given by a division bench comprising Justices Imtiyaz Murtaza and Kashi Nath Pandey, on an appeal by 52-year-old Pandher and 38-year-old Koli, who had challenged the death sentence awarded to them on February 13, this year by the trial court in Ghaziabad.

The judges, while allowing the appeal of Pandher and dismissing that of Koli, made it clear that the "findings recorded by them were only confined to the murder of 14-year-old Rimpa Haldar, one of the 19 victims.

While the acquittal was welcomed by Pandher's son Karandeep, it was met with anger by Rimpa's parents and other locals in Noida who targeted the media.

The High Court acquitted Pandher but upheld the death sentence of co-accused and his servant Surinder Koli in the rape and murder of 14-year-old Rimpa Halder, one of the victims of the infamous serial killings in Nithari in 2007.

They made it clear that this judgement will not affect decisions in the other Nithari cases before the trial court.

The court, while upholding the death sentence of Koli, who had admitted to have killed the girl, observed that the crime committed by him was "gruesome, heinous and cold-blooded".

"We would not forebear from expressing that the accused Surendra Koli is a menace to the society," it said.

The cases came to light in December 2006 when the police raided Pandher's house following complaints by villagers that several of their children had disappeared.

The duo were arrested for the murder of a call girl Payal and later a total of 19 cases were registered by the police after human skulls, bones and clothes belonging to young girls were recovered from the house.

The court, however, disagreed with the trial court's decision to award death sentence to Pandher, who was not charge sheeted by the CBI and whom the sessions judge had summoned invoking section 319 of CrPC.

Pandher's son Karandeep Singh, who was present in the High Court, said he was now looking forward to "justice in the remaining cases against his father".

The High Court, he said, had sustained CBI's charge sheet and "we are quite happy about that".

Pandher's lawyer Manisha Bhandari said that she will try for bail for her client in view of the verdict.

None of the family members of Koli or Haldar was present in court.

The High Court bench declined to remand the case against Pandher for retrial under Section 319, as requested by the complainant's counsel, saying, "We converge to the irresistible view that there is no evidence on record against him".

The judges noted that the trial court had summoned Pandher mainly on the ground that a number of killings had taken place at his Noida residence from where an axe was also recovered at his instance.

The court pointed out that Koli had, in his confessional statement, said that he had killed Haldar with a knife, not an axe, at a time when Pandher was abroad and no one else was present in the house.