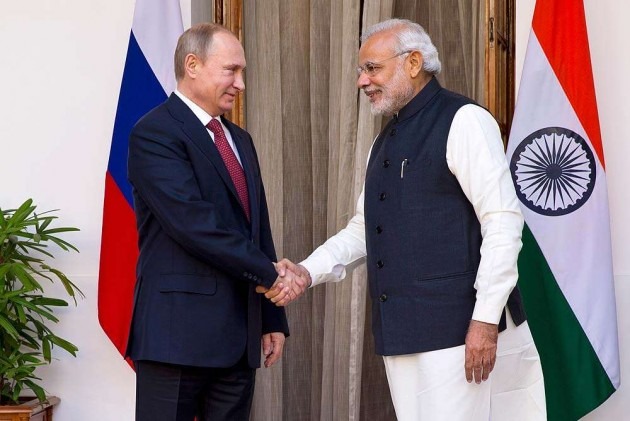 Print
A
A
A
increase text size
Outlook June 01, 2017 10:17 IST All Eyes on Nuclear Power Deal As PM Modi to Meet Putin Today

Prime Minister Narendra Modi and Russian President Vladimir Putin meet today for an annual summit the highlight of which is expected to be the signing of an agreement to build the last two units of the Kundankulam nuclear power plant with Moscow's help.

The two countries are also expected to sign a number of other agreements in wide-ranging sectors, including in science and technology, railways, cultural exchanges and other business areas between private parties also, in addition to a "vision statement" that the two leaders will release.

The nuclear deal, if signed, would be the centrepiece of the summit, and the two units of the plant, with capacity to produce 1,000 MW of electricity each, will significantly boost India's nuclear power generation.

Indian officials have told PTI that last-minute talks are taking place with Russian officials to work out the language of the agreement on a line of credit for building Unit 5 and 6 of the nuclear power plant in Tamil Nadu.

The reactors are being built by India's Nuclear Power Corporation of India Ltd (NPCIL) and Russia's Atomstroyexport company, a subsidiary of Rosatom, the regulatory body of the Russian nuclear complex.

"There is a lot of mutual trust and personal chemistry between the two leaders that has developed over the last three years," Pankaj Saran, India's ambassador to Russia, told PTI.

Also at the summit today, "the leaders will take stock of the current relationship and discuss a blueprint for a vision of the future," he said.

The prime minister last night arrived in the Russian city of St Petersburg, the former capital of imperial Russia that was founded by Czar Peter the Great in 1703, and was also known as Petrograd and Leningrad, on a three-day visit.

Other than the annual summit, he will attend the St Petersburg International Economic Forum tomorrow. It's the first time that an Indian prime minister is attending the economic and business summit.

Modi will begin his Russia sojourn with a visit today to the Piskariovskoe cemetery, a memorial for some 500,000 Russians who were killed in the siege of Leningrad in World War II, which the Russians call the Great Patriotic War.

Modi will then be received by Putin at the Konstantin Palace, a sprawling regal complex that is also the Russian president's official residence where he hosts world leaders. After the summit, Putin will host Modi at a private dinner without any aides.

Ahead of his arrival, Modi wrote an article in Russian newspaper Rossiyskaya Gazetta in which he said India and Russia are "natural partners" in fighting terrorism and asserted that ties between the two nations have "withstood the test of time."

"We have been together in times - good and bad," he wrote.

"India-Russia relations have been the one constant in a world that has changed dramatically since 1947. They have withstood the test of time, and grown from strength to strength. The resilience of our relationship is based on the fact that it rests on the principles of equality, trust and mutual benefit," Modi said.

He also hailed the erstwhile Soviet Union's help to India in building its industrial base.

He said both countries are opening new areas of cooperation in the energy sector, telecommunications and science and technology and they have set up funds to facilitate investment in high technologies.