All 89 DMK MLAs Suspended From TN Assembly For a Week 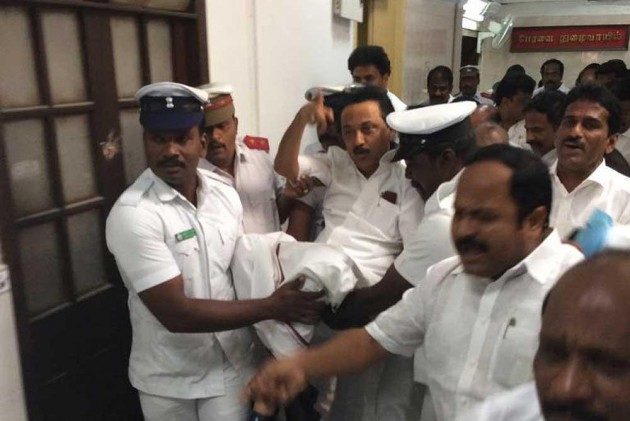 Speaker P Dhanapal ordered eviction of the DMK members by assembly marshals after they stood up and insisted on expunging the remarks even after he rejected their demand and asked them to cooperate for the smooth conduct of the House.

Later, the government moved a resolution suspending the DMK members for a week which was passed by a voice vote.

Trouble erupted during the debate on demands for grants for the Housing and IT departments when AIADMK member S Gunasekaran, without naming Stalin, made some remarks about the 'Namaku Naame' programme undertaken by the DMK Treasurer in the run up to this year's assembly election.

During the 'Namakku Naame' programme, Stalin had extensively toured the state and interacted with people.

The remarks about the programme triggered strong objection from the DMK members who wanted the Speaker to expunge them.

Dhanapal, however, said the MLA had not made any pointed reference to anyone and therefore there was no need to expunge the remarks.

DMK Deputy Leader Durai Murugan said Namakku Naame was an initiative of Stalin and therefore the remarks refer only to him and sought their expunction.

At one point, Stalin himself rose and said he was proud that Namakku Naamme had featured in an assembly debate. He also made some remarks which were later expunged by the Speaker.

Following this, the DMK members stood up and opposed the Speaker's action even as Dhanapal asked them to cooperate in the smooth conduct of the House.

Since the DMK members did not heed his repeated pleas, he summoned the marshals to evict the agitating MLAs.

Stalin, who was physically removed, staged a brief sit-in before being finally taken out of the House.

The Speaker later said he had to resort to such an action as the DMK members did not heed his pleas for cooperation.

Leader of the House and Finance Minister O Panneerselvam then moved a resolution for the suspension of the DMK members for a week, which was passed by a voice vote in the AIADMK- dominated House.

After this, the Speaker said today's proceedings of the House have ended and asked Housing Minister Udumalpet K Radhakrishnan and IT Minister M Manikandan to give their replies to the debate on their departments tomorrow.