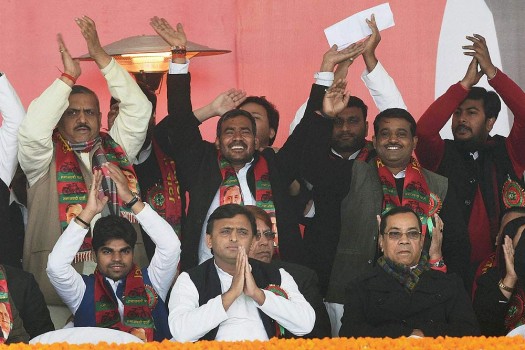 Apparently feeling isolated in the party he groomed for over two decades, Mulayam Singh Yadav today gave a miss to Samajwadi Party's release of manifesto which promised a host of schemes for all round development of poll-bound Uttar Pradesh.

Riding on the crest of "kaam bolta hai" (work speaks) slogan, Chief Minister Akhilesh Yadav, in his new role as the Samajwadi Party national president, announced a slew of schemes which prioritise development of the state.

The Chief Minister directed all candidates to prepare a roadmap for development of their respective Assembly constituencies.

A highlight of the 32-page manifesto carrying photographs of both Akhilesh and Mulayam, but no snap of Shivpal, was Samajwadi Kisan Kosh for farmers to purchase seeds and fertilisers, perhaps to match the Pradhan Mantri Kisan Bima Yojana.

Metro expansion in Agra, Kanpur, Varanasi and Meerut, Samajwadi Party smart villages, construction of Purvanchal and Bundelkhand-Terai expressways, river front development in prominent cities, Rs 10 lakh to lawyers, less than 60 years age, on untimely deaths and Samajwadi sports school were some other salient features. (MORE) However, Mulayam and his brother Shivpal as also

Akhilesh's aide Ramgopal Yadav were conspicuous by their absence from the stage shared by top SP leaders, though the party mentor arrived after the press conference was over, blaming the delay on chock-a-block traffic on roads leading to SP headquarters.

Mulayam later remained closeted with Akhilesh and his wife Dimple, both of whom returned on learning that he had finally reached after senior minister Azam Khan, who doubled up as mediator in recent days, rushed to the party patriarch's bungalow to bring him to the event where posters carried the photo of both father and son.

Armed with EC order, Akhilesh took full control over the crisis-ridden party on January 16, nudging aside Mulayam's claim over the party name and symbol.

Releasing the manifesto, Akhilesh made a veiled attack on Prime Minister Narendra Modi for his 'achche din' promise and pilloried him, saying instead of getting good days, they were handed over 'jhadu' (broom) or making people perform yoga, and asked as to what happened to BJP's 'sab ka saath, sab ka vikas' slogan.

"People are desperately looking for those who had promised achche din," he said.

Akhilesh also ridiculed the previous BSP government as "patthar wali sarkar", accusing it of doing nothing except for installing stone statues of elephants, its election symbol.

"If BSP comes to power again, its government will install bigger statues of elephants," he said, attacking Mayawati, who instantly hit back dismissing the SP election manifesto as "mere formality and publicity gimmick to fool people".

"By mentioning our symbol elephant, Akhilesh has given free publicity and our party is grateful for this," she said and asked voters not to rely on the "tainted face of the head of the corrupt and criminal government".