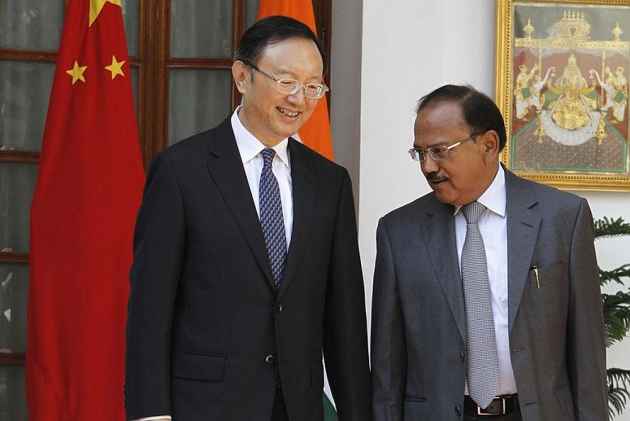 Amid Doklam standoff between India and China, Indian National Security Adviser Ajit Doval arrived in Beijing on Thursday to attend the BRICS NSA's meeting on July 27-28.

The latest standoff between two nuclear armed countries started when China started building a motorable road in Doklam area near Sikkim on June 16. India as well as Bhutan have raised strong objection to the Chinese aggression on the border.

China on June 26 alleged that Indian troops crossed the boundary line in the Sikkim sector of the China-India boundary.

Since then there is a tension between two countries.

India on June 30 told China that its attempt to construct a road in the Doklam area in Bhutan will cause a "significant change of status quo", is a "violation of a 2012 understanding", and will lead to "serious security implications."

However, given the Chinese stand on Doval's visit, it is not likely that the Indian NSA would be holding parleys with Chinese officials to cool-off the simmering tensions on India-China border.

On July 25, the state owned Chinese media said the upcoming visit of Indian National Security Adviser Ajit Doval to Beijing is only meant for BRICS meet and not for solving the current border standoff between the two sides.

In an editorial titled "Doval visit won't sway China over border standoff", the Global Times said, "The BRICS National Security Advisers' meeting is a routine conference held in preparation for the BRICS Summit, and is not a platform to address Sino-Indian border skirmishes."

The Chinese daily said that the Indian media is pinning high hopes on Doval's upcoming trip to settle the ongoing dispute.

The daily reiterated Beijing's firm stand that India's withdrawal along the disputed border is must for any meaningful dialogue between the two sides to solve the issue.

The daily further said that Doval will inevitably be disappointed if he attempts to bargain with Beijing over the border disputes.

"India's unconditional withdrawal is China's bottom line. The Chinese government's strong determination requesting Indian troop's withdrawal is backed by all Chinese people who are firm that we can't lose one inch of Chinese territory," the editorial read.

The editorial warned that People's Liberation Army (PLA) forces are being deployed to the border area, and will take effective countermeasures if India refuses to pull back voluntarily.

It said that the PLA is capable enough to take actions that neither Indian troops nor the government can afford.

On July 20, External Affairs Minister Sushma Swaraj said that all the countries, including Bhutan, are with India on the issue of the Doklam stand-off.

Sushma said the issue is due to the "tri-junction point that is between India, China and Bhutan" and that if Beijing unilaterally tries to change the status quo at the tri-junction, then it will pose a threat to New Delhi's security.

"India wants that troops are removed from the tri-junction point to discuss the issue together. All countries, including Bhutan, are with us," Sushma said in Rajya Sabha on the fourth day of the Parliament Monsoon Session. (ANI)