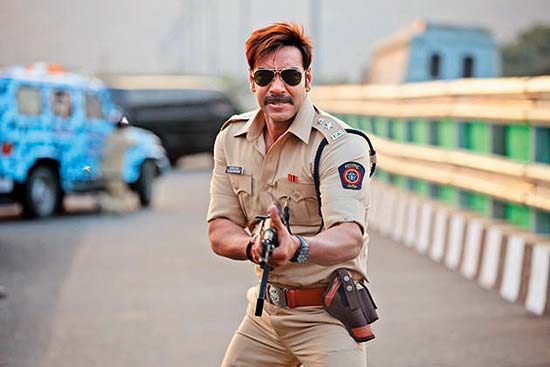 After actor Ajay Devgn posted an audio of self-proclaimed film critic Kamaal Rashid Khan admitting he was paid to tweet in favour of Ae Dil Hai Mushkil, KRK has shot back saying it was, in fact, the star who offered him money to bash filmmaker Karan Johar's movie.

Ajay's Shivaay and Ae Dil Hai Mushkil are clashing at the box-office next month.

Last evening, the 47-year-old actor tweeted the audio conversation of KRK and Shivaay producer Kumar Mangat, where the latter is heard asking him why was he writing things about Johar's movie and critising Devgn's film.

To which, KRK replies, "Have to tweet good things about Karan Johar's film, he paid me 25 lakhs."

Mangat then says, "We will also give you Rs 25 lakh... Don't get Shivaay in between."

Posting this audio on Twitter, Ajay wrote, "Hear what self proclaimed no 1 critic and trade analyst Kamaal R Khan has to say."

The actor also released a statement, writing, "I have been a part of the Indian film industry for the past 25 years and have been associated with over 100 films. My father was a professional action director and I have emotional connection with this industry.

"It therefore pains me to see that people like Kamaal R Khan are holding the film industry to ransom by spreading negativity about films to extort money from producers."

Ajay even said he wanted an investigation into the matter.

"It is very sad that people from our own industry are supporting such elements and spoiling the ethos of industry. I would strongly demand that this be thoroughly investigated by competent authorities to clarify if Karan Johar was indeed involved in this."

In his response, KRK has bashed Devgn.

He tweeted, "Let me clear it. Karan Johar has never paid me or asked me to bash #Shivaay and you can hear it in the tape. I said 25 Lakhs to avoid Kumar."

In another post, he put blame on Kumar and the Singham star by writing, "Kumar+Ajay offered me money to bash #AeDilHaiMushkil as he is offering in the tape also but I refused. I told them that I will do it free."

Karan is yet to break his silence on the matter.

Ajay's actress wife Kajol, who is close friends with Karan, has, however, reacted to the controversy.

She re-tweeted the audio link shared by Ajay and wrote, "Shocked."

The controversy has resulted in trolling and bashing of Ajay-Kajol and Karan by each other fans.

While the filmmaker's followers are bashing him for being "insecure" about the box-office clash between the two films, Ajay's fans are poking fun at Karan saying he is scared of Shivaay.

Both the parties have a lot riding on their movies.

Ajay makes a comeback to direction with Shivaay which he has often said is his most ambitious project yet while Karan has gone behind the lens with his Ranbir Kapoor-starrer after a gap of four years.