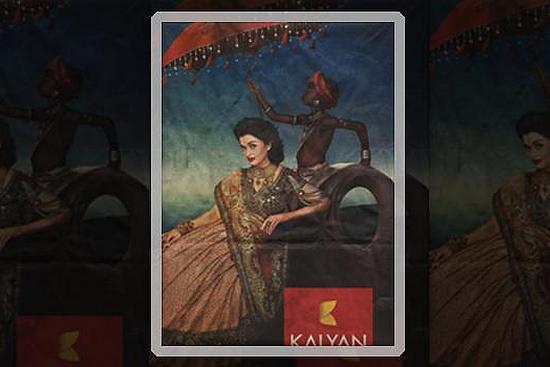 Aishwarya Rai Bachchan has earned the wrath of activists for an "offensive" advertisement for a jewellery brand that shows a child carrying an umbrella over her head but the actress said the actual image was changed by the brand.

In the ad, the 41-year-old actress is seen decked in jewels along with the child, dark and emaciated, holding an oversize umbrella over her head.

A group comprising a feminist activist, a former chairperson of National Commission for Protection of Child Rights among others had written an open letter to slam the former beauty queen's recent print ad, which they felt also promoted child labour.

"We wish to convey our dismay at the concept of this advertisement, and that you have, perhaps unthinkingly, associated with such a regressive portrayal of a child to sell a product...," the letter read.

They asked Aishwarya, who is the National brand ambassador for Kalyan Jewellers, to cease to associate herself with "this offensive image by ensuring that further use of this advertisement is stopped".

"As an influential member of the Indian film industry and a popular star with a large fan following, we trust that you wish to use your image in a manner that promotes progressive thought and action, and would not knowingly promote regressive images that are racist and go against child rights," it further read.

Addressing the writers of the letter, Aishwarya's statement read, "On the onset we would like to thank you on drawing our attention to the observation of the perception of the advertisement. Here is an attachment of the shot taken by somebody during the shoot.

"The final layout of the ad is entirely the prerogative of the creative team for a brand. However shall forward your article as a viewpoint that can be taken into consideration by the creative team of professional working on the brand visual communication. Thank you once again."