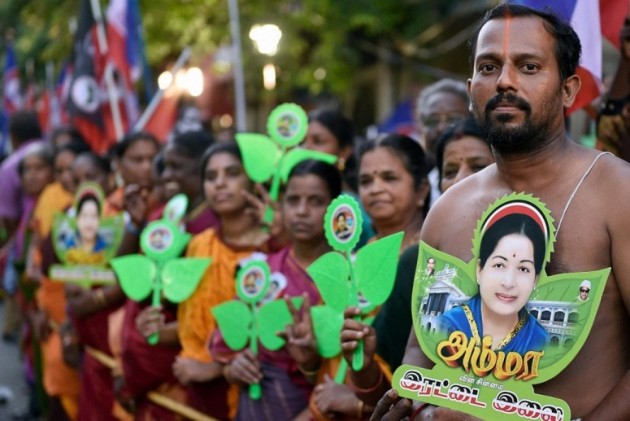 Continuing its electoral dominance amid hospitalisation of its supremo and Chief Minister Jayalalithaa, the ruling AIADMK on Tuesday romped home in all three Tamil Nadu assembly segments that went to polls, triggering celebrations by party supporters across the state.

AIADMK, on a roll since 2011 winning back-to-back state elections and sweeping the 2014 Lok Sabha polls, wrested the Aravakkurichi seat from DMK and retained Thanjavur and Thiruparankundram by margins ranging from more than 20,000 votes to 42,000, dealing a blow to the Dravidian arch rival.

Elections were held to the constituencies on November 19 and the counting of votes was undertaken on Tuesday.

In Aravakurichi and Thanjavur, the elections were held after being cancelled during the May Assembly polls due to alleged corrupt practices, while a bypoll was held in Tiruparankundram to fill a vacancy caused by the death of an AIADMK member.

With Tuesday's outcome, the AIADMK's tally in the 234-member assembly has risen to 136. The number includes the Speaker.

The M Karunanidhi-led DMK had to be content with the runners-up position after harbouring hopes of winning the seats on the claim of "non-functioning" of state government since Jayalalithaa's hospitalisation on Sept 22 last.

AIADMK, which went to the polls highlighting the welfare schemes implemented by Jayalalithaa, garnered an impressive vote share of about 55 per cent, while DMK could manage only 37.8 per cent.

Barely a week before the elections, Jayalalithaa, in her first public communication since being admitted to the Apollo Hospitals, had appealed to people to vote for her party.

"Have taken rebirth because of your prayers, waiting to resume work soon. Appeal to people to vote for AIADMK in Nov 19 polls," she had said.

BJP, which finished third in all the three segments, secured a vote share of 2.5 per cent, pushing regional players like PMK and DMDK further down.

PMK contested in Thanjavur and Aravakkurichi alone and did not field candidate in Thirupparankundram and got 0.3 per cent votes.

BJP's performance is being seen against the background of the Centre taking a stand against constituting the Cauvery Management Board in the Supreme Court.

Actor-turned politician Vijaykant's DMDK, which was the main opposition party during 2011-16, could bag a vote share of just 1.3 per cent after an exodus of several senior party functionaries since last assembly hustings.

All parties barring AIADMK and DMK forfeited their deposits.

In Aravakkurichi, AIADMK's V Senthil Balaji, a former minister in the previous regime, trounced his nearest DMK rival K C Palanisamy by a margin of 23,661 votes marking his return to the Assembly.

Palanisamy, known as KCP in DMK circles, had won the seat in the 2011 polls.

In Thanjavur, the heart of Cauvery delta region and a traditional DMK bastion, AIADMK nominee M Rengasamy retained the seat by a margin of 26,874 votes.

In Thirupparankundram, AIADMK candidate A K Bose trounced his nearest DMK rival P Saravanan by an impressive margin of 42,670 votes.

At the core of AIADMK's traditional support base in Madurai District, an easy win for the ruling party in Thirupparankundram was on expected lines.

AIADMK cadres and supporters broke into celebrations as soon as trends showed an unassailable lead.

On Apollo Hospitals premises, where Jayalalithaa is recuperating, they distributed ladoos, hailing the win as a victory for Amma.

The run up to the elections also saw the DMK questioning Jayalalithaa affixing her thumb impression from the hospital while endorsing AIADMK candidates in the poll papers.

Reacting to the outcome, DMK Treasurer and Leader of Opposition in the Assembly M K Stalin said the party would not be deterred by the loss and would continue to work for people's welfare.

He said the votes secured by his party was "quite impressive" and alleged that electoral 'irregularities' were overlooked by authorities.

The polls to Thanjavur and Aravakkurichi constituencies in May last were cancelled following allegations of distribution of money and gifts by candidates and parties.

Both the AIADMK and DMK had renominated the candidates they had fielded for the cancelled elections, which came in for criticism from various quarters.

Thirupparnkundram bypoll was necessitated due to the death of AIADMK MLA-elect S M Seenivel soon after the assembly polls in May.