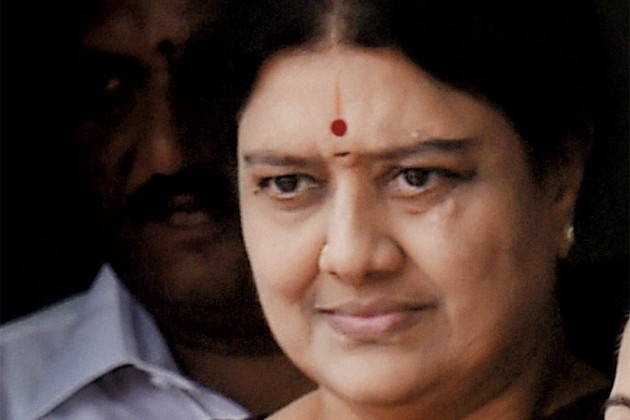 Senior AIADMK leader M Thambidurai today appealed to the newly appointed party general secretary V K Sasikala to become Tamil Nadu Chief Minister, saying the leadership in both the party and governance should be with the same person.

Speaking to reporters after calling on Sasikala, the Lok Sabha Deputy Speaker also cited the ongoing political tussle in the Samajwadi party in Uttar Pradesh to drive home his point that the control of government and party should vest in the same person.

"Now you see problem has cropped up in Uttar Pradesh, the party was with father and government with son that is why the leadership of both the party and governance should be with the same person," he said replying to a question.

Thambidurai met the AIADMK chief at Poes Garden residence of her mentor J Jayalalithaa and gave her a representation urging her to take over as CM. Sasikala becoming the Chief Minister was only "natural and just", he said.

Sasikala, appointed as General Secretary by the AIADMK's top decision-making body General Council on December 29, took charge of the post on December 31, pledging to take forward the legacy of Jayalalithaa.

Already, almost all state ministers, part of the O Panneerselvam cabinet, have made similar appeals urging Sasikala to take over as Tamil Nadu Chief Minister.

Thambidurai said he appealed to Sasikala to become Chief Minister just like her mentor.

He said "Chinamma", as Sasikala is called by partymen, was a "deserving and eligible person" and that was why she was appointed party general secretary.

"Only on that basis (she is the eligible person) we are appealing again to her to take on the reigns of governance too... This is because the responsibility of governing the party and the government should lie with the same person," he said.

"I have made a request that Chinnamma (Sasikala) should immediately assume the post of Tamil Nadu Chief Minister to take forward the work of Amma (Jayalalithaa) in both the party and governance," Thambidurai said.

Asked about the response of Sasikala, he said,"I have made my request as a party worker and given my representation. She did not give any reply."

Stating that a party comes to power for doing good to people by giving electoral promises, he said "It is my opinion that such promises could be fulfilled in the best manner only by the person with whom the party top position is vested."

Giving past examples from the country's political history that it was the party chief who became the executive head of the government too at Centre and States, he said 'Amma', who was the party supremo became Chief Minister when the party was voted to power.

"Since she is the party chief, it is only natural that she also becomes the Chief Minister, it is just," he added.

After the demise of Jayalalithaa on December 5, Panneerselvam was elected as the AIADMK legislature party leader and sworn in as Chief Minister at the same time.