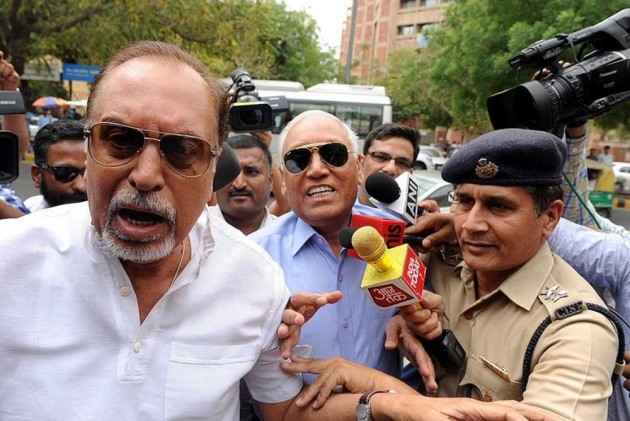 Delhi High Court sought the response of ex-IAF chief S P Tyagi, who is on bail after being arrested in the AgustaWestland chopper scam today, on the CBI's plea challenging his bail claiming its probe would be "hampered" if he remains out.

Justice Vipin Sanghi issued notice to Tyagi, who was arrested on December 9 and granted bail on December 26, listed the matter for hearing on January 3 after CBI said the bail pleas of other accused in the case are likely to be heard by the trial court on January 4.

Justice Sanghi said the endeavour of the court would be to dispose of the matter on January 3 after hearing all the parties.

CBI argued before the high court that each day Tyagi remained out on bail would lead to its line of investigation being "exposed" and "hampered" and the evidence could also be destroyed.

The agency also said its probe was "multi-layered" as it was spread across several countries since various companies were allegedly used to "camouflage the bribe money".

The contention came in response to the high court's query as to why should the 72-year old former Chief of Air Staff be retained in judicial custody at this stage when he was in the custody of the agency for a week prior to getting bail.

CBI admitted before the high court that though the FIR was registered in 2013, "real core investigation started only a few months back" and hence it did not want Tyagi to be out on bail till the charge sheet is filed.

It contended that if Tyagi remained out on bail, he could "alert other potential accused".

A special court had on December 26 this year granted bail to Tyagi, saying CBI has failed to state the alleged bribe amount and when it was paid.

Tyagi, who was interrogated by CBI in its custody for seven days, was asked to furnish a personal bond of Rs two lakh and a surety of like amount as pre-requisites for his release on bail. (more) The trial court had asked Tyagi not to leave the National

Capital Region without its permission and ordered him not to tamper with evidence or try to influence witnesses.

It had noted that Tyagi had joined investigation as and when CBI called him and it was not the case that he either tampered with evidence after registration of the FIR or influenced any witness in the case.

While granting the relief, the trial court also took note of Tyagi's advancing age and his health conditions and said no purpose would be served by keeping him behind bars.

Tyagi, who retired in 2007, his cousin Sanjeev Tyagi and lawyer Gautam Khaitan were arrested on December 9 by CBI in connection with the case which relates to procurement of 12 VVIP choppers from UK-based AgustaWestland during the UPA-2 regime.

The court had on December 17 sent all the three accused to judicial custody till December 30.