After Kochi, 'Kiss of Love' Goes to Kolkata 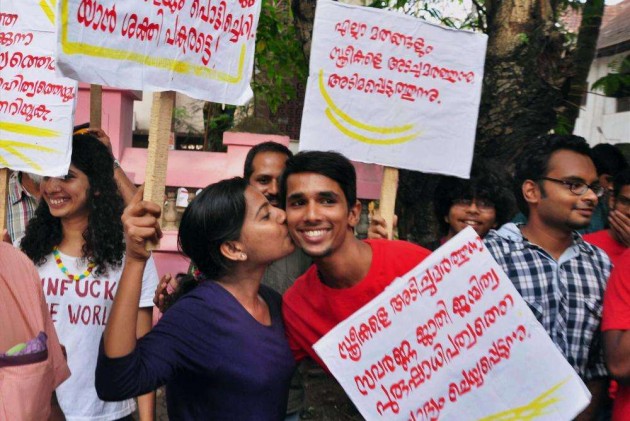 After Kochi, the City of Joy witnessed its own 'Kiss of Love' edition by students of two universities to protest moral policing and promote gender sensitisation.

Alleging the 'rise of religious fundamentalism and fanaticism', activists participated in a protest rally in Jadavpur, while in the north, a large number of students of the Presidency University gathered in front of the Indian Coffee House on College Street holding placards as a show of defiance and a mark of solidarity with the movement that started in Kerala.

"Time has come to protest against encroachment on our liberties and freedom of expression. I want freedom to choose whom and where to kiss. It is nobody's business. To kiss is the highest form of protest. So we are protesting against the moral policing. We don't want to go in any form of tussle with them so we are trying to spread the message of love," a Ph.D student Sayantani, who kissed friend Suchitra yesterday, said.

"This protest is to show our solidarity with the movement which started in Kochi. We are in touch with the organisers in Kochi for guidance," another student commented.

"This might not change things, but we should keep on trying. We are moving against the culture of hate and intolerance," third-year student of English Literature Ronita Sanyal said.

According to the organisers, the protest was planned in reaction to the alleged incident of the killing of a Dalit boy and his parents in Maharashtra for the boy's relations with a girl from an 'upper caste'.

"The Freedom to Kiss' movement is to highlight the importance of such tendencies of the state. It is self-evident that there is an urgency to protest tyranny like these," a PHD student of the Presidency University said.