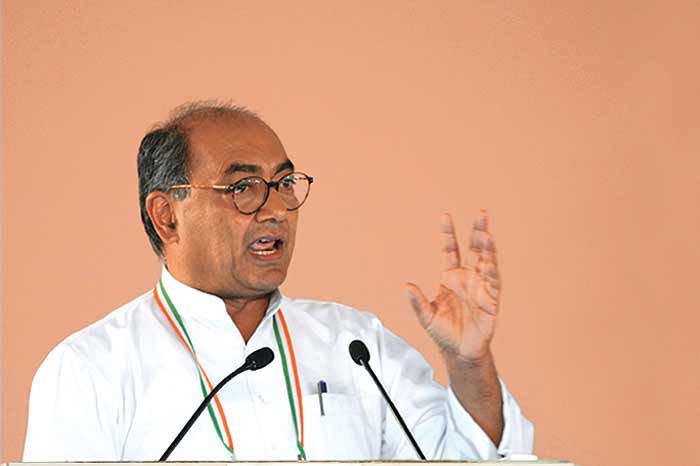 Speaking at the inauguration of Kalki Mahotsava here last night, Digvijay praised Raza, who enjoys minister of state rank in SP government in Uttar Pradesh, and said that he along with Acharya Pramod Krishnan have started a mission of Hindu-Muslim unity in the country.

His remarks came just days after the Congress dubbed AAP as the "B team of BJP" following Kejriwal's meeting with the cleric in Bareilly. The BJP too had lashed out at the AAP leader saying he was playing the communal card and the meeting had exposed him.

Congress spokesman Meem Afzal had alleged that Kejriwal "whose politics originated with the backing of the RSS was trying to make Muslims a football" for electoral mileage.

Lauding Tauqeer Raza, the leader of the Ittehad-e- Millat Council, for his views on protecting cows expressed at the function, Digvijay Singh said that he had heard that he triggered communal riots, but the thoughts he expressed were a slap on the faces of those who make such allegations against him.

The Congress general secretary took a potshot at BJP saying that he constituted the first Gau Sewa Ayog in the country in Madhya Pradesh, but the later BJP government did politics on it and dissolved it.

Raza told reporters after the function that he was not bothered if people objected to his meeting Kejriwal. The cleric said he supported Aam Admi Party's fight against corruption and communalism and if required he would "participate in Kejriwal's election campaign".

Inaugurating a cow shelter, Raza said the manner in which thousands of cattles were being slaughtered and exported to foreign countries was a matter of great concern and if it was not stopped a day would come when the children in the country would not get milk to drink.

He said that a joint campaign was needed to save cattle.

The cleric is known for having issued fatwas like announcing bounty on controversial Bangladeshi author Taslima Nasreen but Kejriwal had claimed that the cleric had distanced himself from it.

Talking to the reporters, the cleric said that he was in favour of fight against corruption and communalism and as Kerjriwal was doing the same, he supported it.

Raza said he met Kejriwal and "if the people raise questions let them do so".

Replying to queries on exit polls, Digvijay said that the Election Commission's ban was a good step and a victory of the democratic system.

Union Minister of State for Agriculture Tariq Anwar said that this should have been done as the EC had consulted all the parties.

On a question whether it was Congress' victory, Anwar said that it was not a question of victory for any party.