After Ganguly's Request, Anurag Thakur Says If Indian Cricket Requires him, He Won't Shy Away 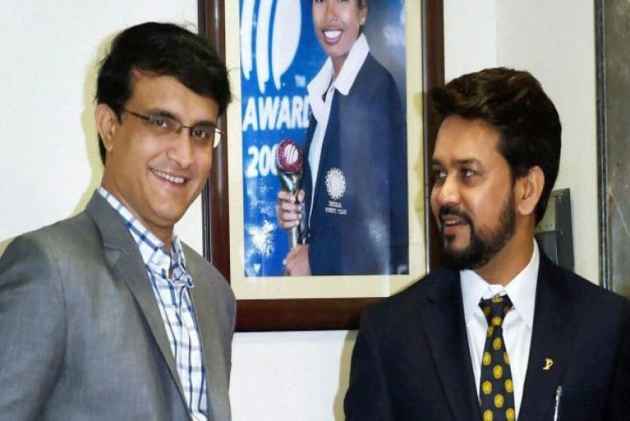 Print
A
A
A
increase text size
Outlook July 16, 2017 14:45 IST After Ganguly's Request, Anurag Thakur Says If Indian Cricket Requires him, He Won't Shy Away

He has been away from the hullabaloo of Indian cricket for the last six months but former BCCI president Anurag Thakur says if required, he "won't shy away from accepting responsibility".

The Supreme Court recently dropped perjury charges against Thakur after he tendered an unconditional apology. He was removed from the BCCI by the Supreme Court in January for failing to convince Board members to implement the Lodha Reforms.

Since then, the SC-appointed Committee of Administrators (CoA) has spent an unsuccessful six months failing to make any headway in the matter.

Asked if he is a relieved man, Thakur said: "I had complete faith in judiciary".

The Hamirpur MP has been very busy with his political work as well as looking after other sporting activities.

"During all these months, I was busy doing what I love most -- promoting sports. I organised the Himachal Pradesh State Olympics, which was a huge success. I am also involved with Hockey Himachal as promoting Olympic sports in the state has been one of my prime endeavours," said Thakur.

"Also, I am the chairman of Parliamentary Committee on Information and Technology, my constituency work in Hamirpur -- I had a very busy six months," he said.

Thakur, however, didn't wish to comment on the ongoing drama regarding appointment of chief coach and support staff.

He doesn't want to talk on BCCI's internal matters and only twice has he aired his views on cricketing matters.

The first time was when he supported Virat Kohli after the 'cheatgate' incident during the home series against Australia and then when Kohli was being criticised after the infamous fallout with former coach Anil Kumble.