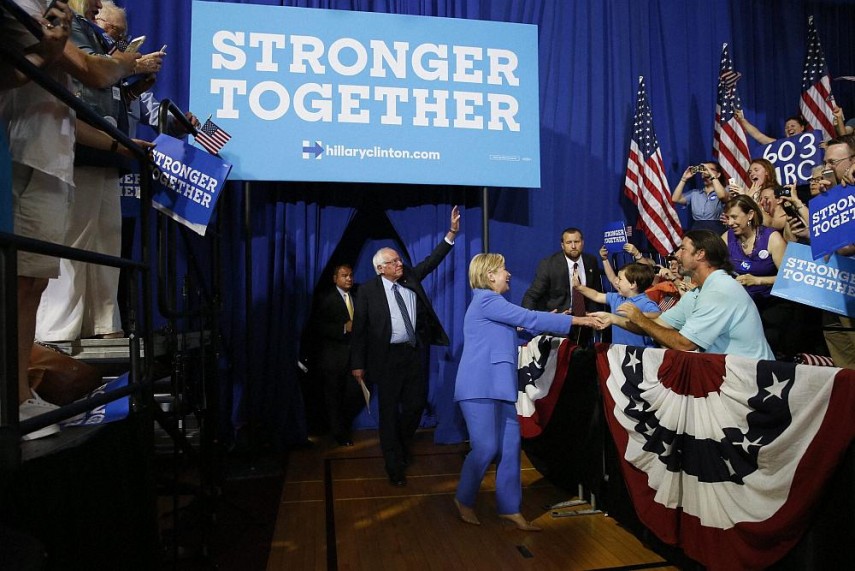 Hillary Clinton's campaign sought to squelch a political firestorm over hacked emails that deepened dissent among Bernie Sanders' loyal supporters, turning to some of the party's biggest stars to heal divisions on the Democratic convention's opening night.

First lady Michelle Obama was making her first appearance of the presidential campaign. Sanders was taking the stage in a highly anticipated address, as was Massachusetts Senator Elizabeth Warren, a favourite of liberals and one of the party's toughest critics of Republican Donald Trump.

"Trump thinks he can win votes by fanning the flames of fear and hatred," Warren said in excerpts released ahead of her speech. "By turning neighbour against neighbour. By persuading you that the real problem in America is your fellow Americans -- people who don't look like you, or don't talk like you, or don't worship like you."

Clinton's campaign hoped the nighttime line-up would overshadow a tumultuous start to the four-day convention. The release of hacked party emails revealed the Democratic National Committee had favoured Clinton over Sanders in the primary, despite vows of neutrality. The uproar led to the forced resignation of party chair Debbie Wasserman Schultz.

While her ouster was a major victory for Sanders, it wasn't enough to ease the frustration of his supporters. Chants of "Bernie" echoed through the arena as the convention opened, and boos could be heard at times when Clinton's name was raised.

Outside the convention hall, several hundred Sanders backers marched down Philadelphia's sweltering streets. Signs carried messages such as "Never Hillary," and police said 55 people were cited for disorderly conduct after trying to climb barricades near the Democratic convention.

For Clinton, it was a turbulent start to a historic gathering that will culminate in the nomination of the first woman to lead a major US political party. It also sapped some of her energy coming out of Trump's chaotic convention last week and the well-received rollout Saturday of her running mate, Virginia Sen Tim Kaine.

Clinton's team hoped Wasserman Schultz's resignation -- along with an apology from the DNC to Sanders and his supporters -- would keep the convention floor calm. But Sanders' aides reached out to the Clinton campaign Monday afternoon to express concerns that supporters would still try to disrupt the proceedings, according to a Democratic official.

The discussions between the two camps prompted Sanders to send emails and text messages to supporters asking them not to protest. "Our credibility as a movement will be damaged by booing, turning of backs, walking out or other similar displays," Sanders wrote.

The party infighting had echoes of last week's Republican convention, where some major GOP leaders voiced their displeasure with Trump and others didn't even show up. Clinton promised a stark contrast to the GOP gathering, saying she planned to highlight "success stories" and flesh out details of her proposed policies.

Wasserman Schultz had planned to be among those taking the stage, despite the email hacking controversy. But she stepped aside, bowing to pressure from Democrats who feared the mere sight of her on stage would prompt strong opposition from Sanders' backers.

Sanders was a relatively unknown Vermont senator when he decided to challenge for the Democratic nomination. He stunned the Clinton campaign with his broad support among young people and liberals, as well as his online fundraising prowess. But he struggled to appeal to black voters and couldn't match the former secretary of state's ties to the Democratic establishment.

Sanders previewed his remarks during an appearance earlier yesterday before supportive delegates. He implored them to vote for Clinton, generating a chorus of boos.

"Brothers and sisters, this is the real world that we live in," Sanders said as he tried to quiet the crowd. "Trump is a bully and a demagogue."

The controversy over some 19,000 leaked DNC emails, however, threatened to complicate those plans. The correspondence, posted by WikiLeaks over the weekend, showed top officials at the supposedly neutral DNC favouring Clinton over Sanders in the presidential primaries.