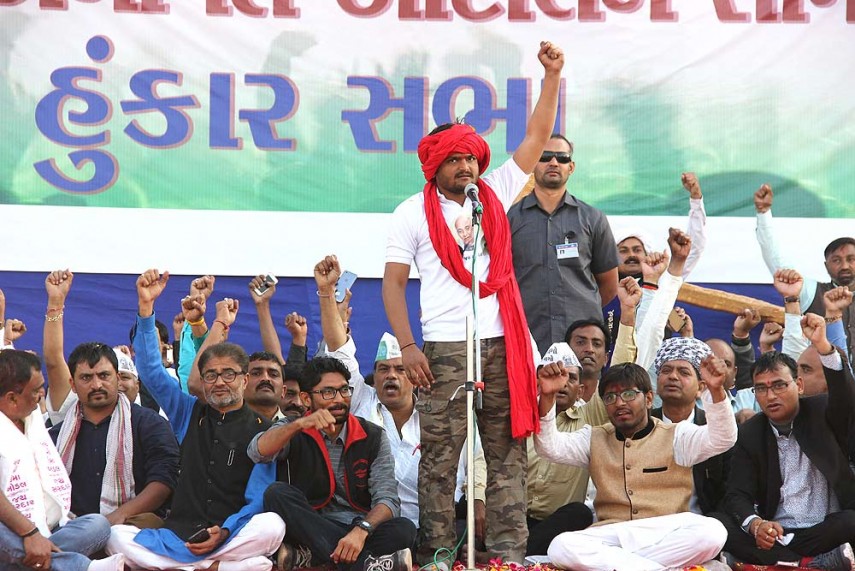 A day after he asked Patels to join him for a "dangal" (wrestling match) for securing reservation in Gujarat, quota spearhead Hardik Patel today said here he does not believe in violence and considers reservation as a "tool" to strengthen the democratic and administrative system.

Hardik said the country will become the global leader if recommendations of Mandal Commission are implemented in "true letter and spirit."

"We are demanding reservations for our community but at the same time, we are not opposing or we are not against SC, ST or OBC community and I feel that in India every caste and community should get their share of reservation on the basis of their population numbers," Hardik said while appealing to students to raise their voice in favour of quota system.

The quota protagonist, who returned to Gujarat yesterday after spending six months in Rajasthan as part of his bail condition, today addressed students at a session on 'Reservation on caste: Social Justice or Injustice' at the 7th Bhartiya Chhatra Sansad, organised by the MIT's School of Governance.

Hardik was booked by Gujarat police for sedition in connection with the violence in 2015 during the Patel quota stir spearheaded by him, seeking reservation in government jobs and education for his community.

"We do not believe in violence. In fact, we did not resort to violence, however, it was reaction to the action as excesses were used against our sisters, sedition cases were slapped against our youth," he said in an apparent reference to the 2015 agitation.

The Patidar leader said reservation is not "alms" but a "tool" to strengthen the democratic and administrative system in the country and reiterated that his fight to demand quota will continue.

He also appealed to students to think about farmers' community as the "country is there because of the farmers."

"With the correct use of reservations and if we unite all the castes and communities, we will be able to lead the country to become global leader," Hardik said.

He also extended his support to the Maratha Muk Morcha, the organisers who have been taking out the morchas seeking reservation for Marathas in government jobs and educational institutions.

"The quota system is given by the constitution of India and we extend our support to the Maratha Morcha and ready to stand with them," Hardik said.

Initiated in 2011, Bharatiya Chhatra Sansad is a non-political platform to sensitise and harness the power of youth, mainly through the general secretaries, joint secretaries and socially active and politically sensitive students from around 25000 colleges of more than 400 universities in India. (More) Hardik said, "I am son of (mahatma) Gandhi and at the

same time I am also son of Bhagat Singh. So I am not afraid of any violence and imprisonment.

"Under the name of Vibrant Gujarat, companies are taking away lands of farmers and today the son of the same farmer is forced to work in such plants...That is why we are seeking reservations," he said, adding their fight for reservation will continue unabated.

He said they are raising the voice for those who are deprived and belong to lower sections of society and are also fighting for the cause of farmers.

Addressing his maiden rally on his return to Gujarat from the six-month 'banishment' yesterday, Hardik had appealed to Patidar community to get united to fight against the "tanashahi" (autocracy) prevailing in Gujarat.

"Let us come together again. I want you to reach out to every citizen living in each part of the state. Let us awake them about our cause. Let us join hands to do a GMDC-like dangal again. I am ready to address a rally at GMDC if government gives us permission," he had said.

Continue FREE with Ads Pay Rs. 1 to Read Without Ads
READ MORE IN:
Hardik Patel National
Next Story : In a First, Robot Reporter Gets Its News Article Published
Download the Outlook ​Magazines App. Six magazines, wherever you go! Play Store and App Store