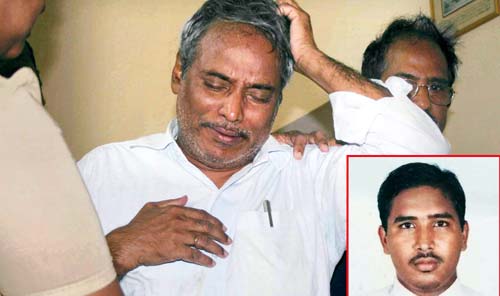 An African-American, Brandon Johnson, has been charged with triple murder including that of Akshay Vishal - the techie from Hyderabad who worked with the Satyam Computers in Little Rock city of the US.

Johnson, 20, who in the past one month has been involved in about a dozen cases of robberies and at least three murders, was arrested by the Little Rocks Police on Thursday.

Johnson's girl friend, Victoria McCoy, has also been arrested by the police on the criminal charges for using Akshay's credit card.

Akshay, who worked with the Dessault Falcon Jet on behalf of Satyam Computers in Little Rocks – the largest city of Arkansas State, was shot in his leg by Johnson with a .380 caliber handgun on Tuesday night. Before this, Akshay even handed over his wallet to Johnson.

Akshay, 26, who stayed with his girlfriend at 1710 Michael Drive, was rushed to a local hospital where he succumbed to his injuries. A few hours later, Johnson, the police alleged, shot at another resident Eric German when he apparently did not comply fast with the assailant's directive to hand over his wallet. German was pronounced dead at the scene.

After these two murders, Brandon and his girlfriend, used the money and credit cards in the two wallets for buying things from the McDonalds, fill up gas and rented out DVD's to watch movies. Following a series of clues, Brandon was arrested from the residence of his girlfriend Thursday afternoon.

McCoy, who had used Akshay's credit card at McDonalds and the Shell Station (petrol pump) was charged with the illegal use of a Credit Card.

The police said more charges are anticipated as the investigations continue.

Meanwhile, the Indian Consulate in Houston sent a diplomat to Little Rock to assist local authorities and friends of Akshay so that the body can be sent to India as soon as possible. It is believed that Akshay's body will be flown to New Jersey today and is expected to reach Hyderabad on Monday.

The entire cost is being borne by Satyam Computers – Akshay's employer.

The killing is the latest one in the series of murders of Indian students and professionals in the US.

Arpana B Jinaga, an IT engineer in Seattle was found dead in her apartment on November 3 while an engineering student in Southern Illionis University T Soumya Reddy was found murdered in September. Her cousin Vikram Reddy, also a software engineer in Chicago, was found dead nearby.