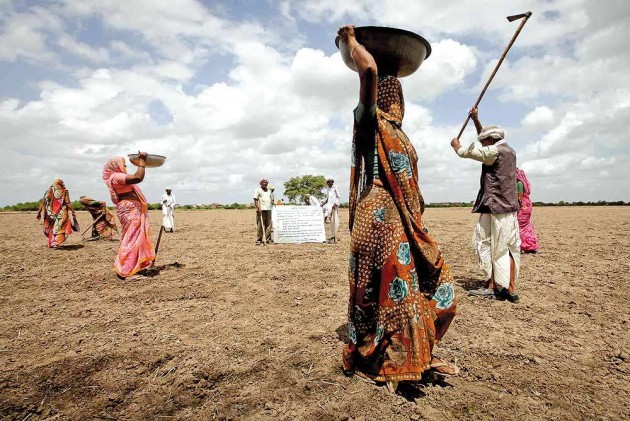 With climate change casting a shadow on the behaviour of monsoon, the country should put in place pro-active plans to meet any contingency and maximise benefits of a good rainfall to soften the blow of any deficit, eminent agriculture scientist M S Swaminathan has said.

"El Nino is at the moment unpredictable...Both La Nina and El Nino...One enhances the rainfall, the other makes it less. On climate change, meteorologists are not able to forecast very accurately. They can say approximately. That's one of the problems today.

Noting that the approach at present to the weather patterns is "reactive," he said the monsoon management strategies should become more scientific to prevent hardship to the agriculturists.

"Long ago, I said we must be proactive, not reactive. Now, we are reactive. We have a drought, then you say contingency plans have been prepared...The correct seeds are not available, the farmers sow and within three days again the crop fails. Therefore, we cannot be acting in a very ad hoc manner. It has to be done in a much more serious, pro-active planning.

"We should plan both. Maximise the benefits of a good monsoon and minimise the adverse impact of an abnormal monsoon. The planning should be on both sides of the coin. So, unless our monsoon management strategies become more refined, more scientific, we will find that the human hardship will be high. The farmers will be hard put. Suicides will take place and (it will lead to) very unfortunate situation," he said.

Making NREGA (National Rural Employment Guarantee Act) also focused on monsoon management and crop planning would go a long way in facing the vagaries of nature effectively and protecting the farmers from downsides, Swaminathan, known as the 'Father of the Green Revolution in India', said.

"One is we have a problem of resources. Therefore, we must maximise the benefits of the investments we are making," he said, adding, the main aim of NREGA should be to manage drought, flood and monsoon.

"Workers must be trained. Plan must be developed. Every block must have a monsoon management committee, which will provide the inputs for planning," Swaminathan said. Highlighting the importance of crop planning, he said low risk agriculture and provision of insurance cover would protect farmers from the burden of crop failure.

"Secondly, we should also do crop planning. In earlier days, for example, (in) Telangana and so on, lot of castor was grown. Castor was a very important cash crop and a very hardy crop.

"But now, they have all given that to BT cotton. So, from low-risk agronomy, low risk agriculture, our farmers have been made to move to high risk agriculture but without corresponding protection like insurance," he said.

"If they take credit, I recommended over 12 years ago, in a report on biotechnology, the companies which are selling all these seeds must also give the farmer an insurance policy. If the crop failed due to reasons beyond the control of the farmer, therefore they must be insured.

"So, lot of action has to be taken. We have a disaster management authority. I don't know what they are doing. But, they are publishing a number of papers. But, very important is you have to be pro-active. Pro-active not only in advice, pro-active in terms of methods of implementing that advice," the eminent agriculture scientist said.

To a query, Swaminathan said small-holder farmers in the country need to join hands as farming is becoming more business-oriented in industrialised countries which have the advantage of large holdings.

"They have to increasingly go into some kind of, if not a cooperative, at least some cooperation; some self-help group of farmers, some associations of farmers or producer companies of farmers. Something has to be done to give the power of scale.

"Otherwise, they will have difficulty. Because, in a competitive world, where farming is becoming more business in industrialised countries, with very large farms, to compete with them, you require the power and economy of scale.

"That can be done by many ways. Dr Kurien (of Amul) did it in milk by cooperatives. Where cooperatives don't work, you have self-help groups or producer companies you can start, with young people. Many ways of doing. But sooner we do something to give the power of scale to small producers, (otherwise) they will be at a disadvantage," he said.