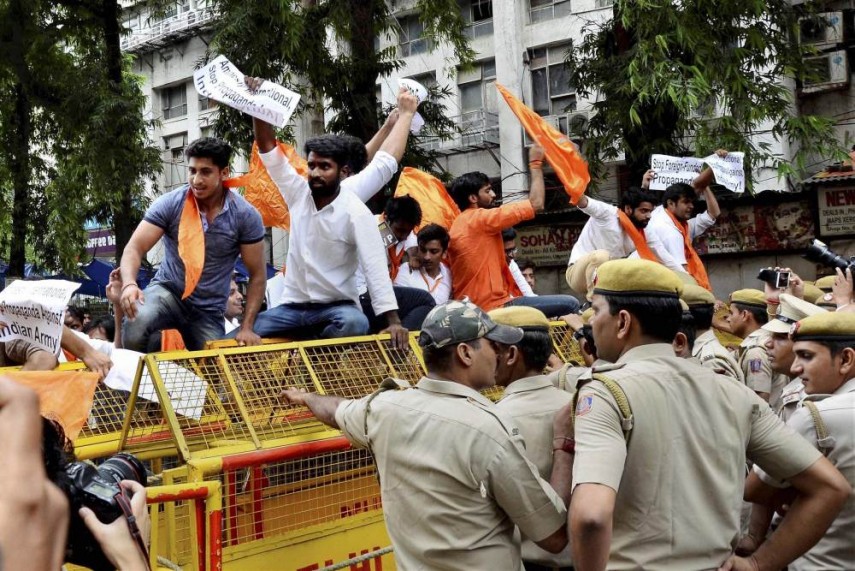 The Akhil Bharatiya Vidyarthi Parishad (ABVP) activists burnt an effigy of AMU Vice Chancellor Lt Gen (retd) Zameer Uddin Shah yesterday and issued a "72-hour ultimatum" to the university authorities for taking punitive action against the professor, failing which they threatened to launch an agitation.

The RSS-backed students' body has demanded the district administration's intervention in the matter if the university authorities do not take any action, ABVP spokesman Dhiraj Choudhary said today.

They also accused the AMU authorities of "shielding" Prof Majid Khan of the department of Islamic Studies instead of taking action on the basis of the complaint against him by his own students.

When contacted, AMU Vice Chancellor told PTI, "We have zero tolerance for any sort of anti-national activity and the allegation that we are trying to shield anyone is totally baseless. There is no evidence whatsoever against the Professor."

Refuting the ABVP's allegation, a senior AMU official said a two-member inquiry panel which had been instituted against Prof Khan following a complaint in this regard by some students, has exonerated him of any anti-national utterance during discussion in the classroom.

The official said the matter was linked to the internal power politics in the department.

Vice Chancellor Shah had on Tuesday said the the inquiry committee had gone into the allegations made by 30 students in a written complaint to him in March 2016 and "exonerated Prof Majid Khan of any anti-national utterances in front of his students".

Khan was, however, cautioned not to discuss extraneous and politically sensitive issues in the classroom, he said.

According to some of his associates, he had been advised not to exacerbate the controversy by issuing any statements in this matter.