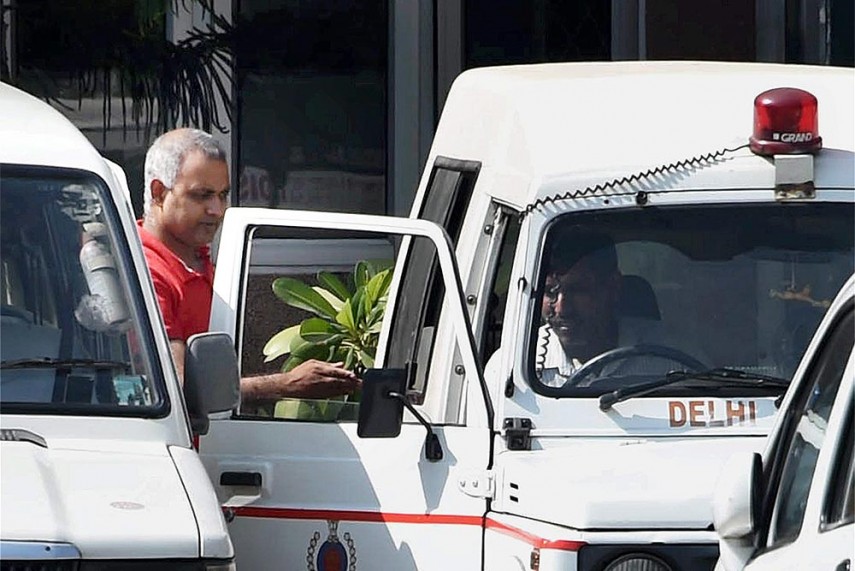 AAP MLA Somnath Bharti was today arrested for allegedly inciting a crowd to damage part of the AIIMS boundary wall and misbehaving with security officials, becoming the second party legislator to be arrested by Delhi Police in the past 24 hours.

Bharti was arrested by a police team from Malviya Nagar in the afternoon and taken to Hauz Khas Police Station where the case was registered against him on September 11.

"He was taken to Hauz Khas Police Station and will be produced before a court later in the day," a senior south Delhi police officer said.

Fifteen AAP MLAs have been booked by the Delhi Police till now on various charges and 12 have been arrested.

AAP MLA and chairman of Delhi Waqf Board Amanatullah Khan was yesterday arrested by south-east Delhi police in a case of sexual harassment filed against him by his sister in law.

The case against Bharti was registered on a complaint filed by chief security officer of AIIMS R S Rawat.

In his complaint to police, Rawat had alleged that Bharti had provoked the mob to damage the fence of the hospital with JCB at Gautam Nagar Nallah road in order to give access to unauthorised persons inside AIIMS property and also misbehaved with security personnel.

The case was registered against Bharti under IPC sections 147 (punishment for rioting), 148 (rioting, armed with deadly weapon), 186 (obstructing public servant in discharge of his public functions), 353 (assault or use of criminal force to deter a public servant from discharge of his duty) and 3/4 Prevention of Damage to Public Property Act.

Bharti had then defended his action and accused the AIIMS of "lying" on the issue.

"AIIMS is lying. They have been denying legitimate access to Gautam Nagar residents. AIIMS even refused to (go to) PWD meetings. Wherever common man will be troubled I will go. The allegation that residents dismantled the wall is a blatant lie. I will fight in court," he had tweeted.

Bharti was previously arrested by Delhi Police in December 2015, in connection with the attempt to murder and domestic violence case filed by his wife.

AAP sought to defend Bharti, saying the police action was a "diversionary tactics" in view of elections in Goa and Punjab.

"This is poll season and till the elections are not over in Goa and Punjab, arrests like these will keep happening," Delhi Health minister and senior AAP leader Satyendar Jain said.