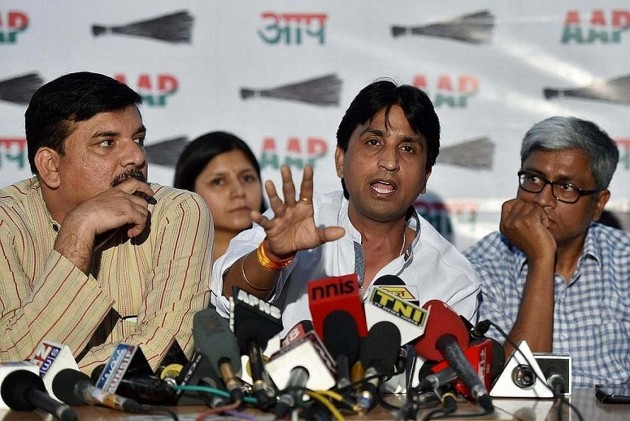 The divide within the AAP over its leadership's claim of EVM rigging appeared to widen today with senior leader Kumar Vishwas pointing to reasons beyond the party's official stand to explain its recent poll defeats.

Vishwas, a member of party's top decision making body, the Political Affairs Committee, said there has been a "communication gap" between the party, its volunteers and voters, adding that the AAP is getting "Congressionised" to an extent.

He said during instances like terror attacks and surgical strikes, political parties should work shoulder-to-shoulder without seeing who is at the helm of affairs.

"There has been a communication gap between volunteers and the party leadership. We should first decide whom did we start our fight with. (Is it) corruption, the Congress, Narendra Modi or the EVMs?

"Should we run a campaign to change electoral process. Problems in the EVMs are a part of elections. It be should be questioned," Kumar said in an interview to Aaj Tak.

The AAP leader said with the poll results it has also become "obvious" that people did not vote for the AAP.

"By and large, we could not convey our point to people and there was a big communication gap. We could not convince people about work done by the Delhi government did," the AAP leader said.

The party has suffered a string of defeats since last two months. It performed far below expectations in Punjab, drew a blank in Goa, forfeited its deposit in the Rajouri Garden by- poll and lost miserably in MCD polls.

Vishwas is not the only AAP leader to differ with the party leadership's view on EVMs. Delhi Law Minister Kapil Mishra and party MP from Sangrur Bhagwant Mann also hold a contrarian viewpoint.

Vishwas said instead of looking at 10-years of "misrule" of the BJP in the MCDs, the voters analysed what the AAP said.

"We could not convince people about the good work done by the party. That connect is missing and the party needs to revive it. We need to generate that confidence in people and enthuse our volunteers," the AAP leader said.

He said, while the current BJP has become 80 per cent Congressioned because of its "kitchen cabinet, dynastic politics and appeasement of majority and minority as per convenience," Vishwas said the same is happening with the AAP to an extent.

On the Shunglu panel report, formed by then LG Najeeb Jung to probe whether rules were broken while were being taken by the AAP dispensation, Vishwas said, "Some questions remained to be answered and we should address questions with transparency."

He said the controversy after the surgical strike could have been avoided. The BJP had accused Kejriwal of asking for proof for the strikes.

"This (the controversy) was not important and could have been avoided. When our armed forces are fighting a battle against terrorism, crossing the LoC to conduct surgical strike, at that time one should back the person who is at the helm of affairs.

"Narendra Modi is AAP's political opponent and the party will continue to attack him, but he is also the Prime Minister of the country," Vishwas said.

Continue FREE with Ads Pay Rs. 1 to Read Without Ads
READ MORE IN:
Kumar Vishwas National
Next Story : Male Chauvinism Has No Room In A Civilised Society: SC
Download the Outlook ​Magazines App. Six magazines, wherever you go! Play Store and App Store