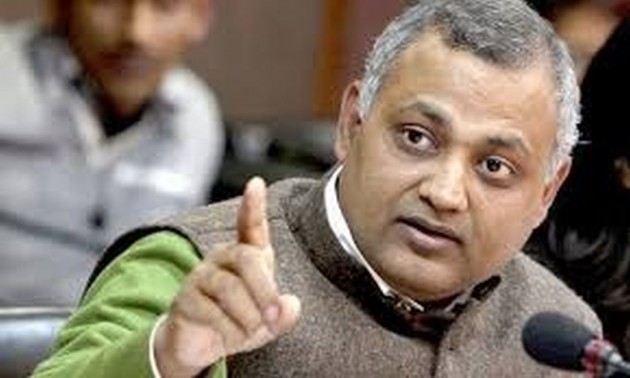 He further said the AAP would also raise the EVM issue in the all party meeting which is to be held tomorrow.

Meanwhile, Delhi Labour Minister and AAP leader Gopal Rai said, " We have kept our three demands. The EC has said that they will think about our demands in the all party meeting. We will wait for their meeting. After the all party meeting we will make our strategy. We are ready to cooperate with the EC investigation."

Earlier in the day, the AAP staged a protest outside the EC's office over the EVM issue.

One of the protesters said, "We want the EC to wake up and amend the machine. The Bharatiya Janata Party (BJP) had been winning by taking all votes into its basket. And, our demand is that all elections that have taken place should be recalled again."

Criticising the BJP over the EVM tampering row, the AAP on Tuesday staged a "live demonstration" of alleged EVM manipulation in the Delhi Assembly.

During the special day-long session of the Delhi Assembly, AAP leader Saurabh Bharadwaj got a machine similar to the EVMs and gave a demo about the same.

He said the entire game was about a secret code, which once entered into the machine transfers all the votes to that one party which is supposed to win.

He then pressed the secret code and then gave another eight votes, all to AAP. As per the votes, the maximum votes should have gone to the AAP, but the results said a different story.

Bharadwaj further said that the secret code was easy to enter as the ballot unit was covered by a cardboard box and therefore, only the voter can see inside it.

Bharadwaj also condemned the enquiry report of the Election Commission, saying that it had no basis.