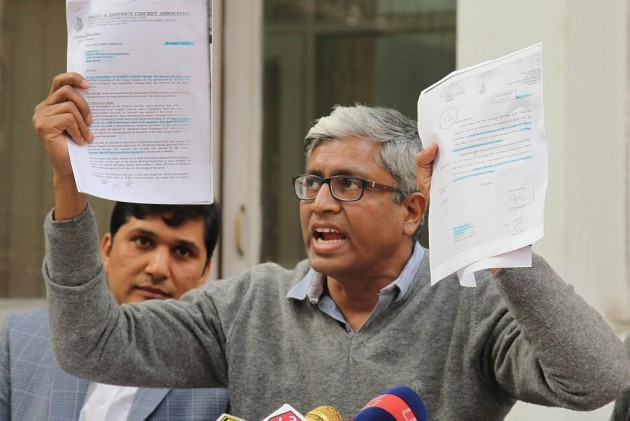 Rejecting BJP's claims about Prime Minister Narendra Modi's degrees and marksheets, AAP and its leader Arvind Kejriwal today claimed the documents had "glaring discrepancies" and stuck to the charge that the documents had been forged.

Hours after BJP President Amit Shah and Finance Minister Arun Jaitley released Modi's BA and MA degrees, Kejriwal claimed documents relating to the Prime Minister's graduation have been sealed by the Delhi University and wondered why it was not implementing the CIC order in the matter.

Earlier, addressing a press conference, AAP leader Ashutosh said Modi's name does not match with what has been mentioned in the BA marksheet and the MA degree and claimed there were discrepancies in the year of passing as well.

"Amit Shah and Arun Jaitley are not Gods. Instead of demanding Kejriwal's apology they should say sorry to the nation for committing such a crime of presenting forged documents. The entire country knows about Amit Shah and Modi's past."

Ashutosh said striking off the part of one's name was not possible without an affidavit and asked Jaitley and Shah to produce copy of the affidavit.

"His MA degree says he had done his post-graduation in 'Entire Political Science'. Is that even possible ? There are a lot of glaring discrepancies in his degrees and masters' degree," said Ashutosh.

AAP also issued a statement in which it raised several questions.

It also alleged that the roll number was missing from the MA certificate.

"The degree in 1983 appears to have been prepared by someone who doesn't usually do the task; missing roll no. And use of extraneous 'Entire' is glaring," it said.

The AAP said its leaders will visit Delhi university's Chief Public Information Officer's office tomorrow to get details of Modi's BA degree and even asked Shah and Jaitley to join them.

The AAP leader Ashutosh also claimed Modi had failed once in BA.

He said he has filed an RTI application seeking copies of enrolment register and convocation register from Delhi University.

Earlier in the day, BJP chief Amit Shah and Finance Minister Arun Jaitley displayed Modi's degrees at a press conference and demanded an apology from Kejriwal accusing him of defaming the Prime Minister.

The CIC had asked the DU and Gujarat University to provide information on Modi's degrees based on a letter by Kejriwal.