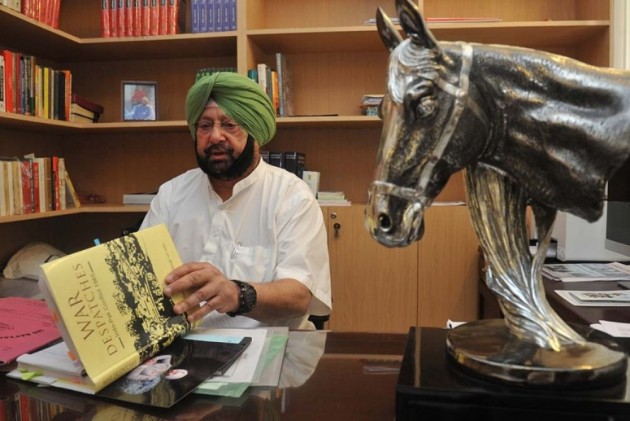 Punjab Congress chief Amarinder Singh on Friday claimed that the Aam Aadmi Party (AAP) had lost "all moral rights" to contest the 2017 Assembly polls in the state after the latest revelations of corruption in the party.

Coming on the heels of a series of corruption and sex scandals that had "rocked" the AAP in the recent past, the allegations levelled by Vinod Kumar against party leaders Sanjay Singh and Durgesh Pathak had "nailed" Arvind Kejriwal's "lies" about zero tolerance in his party against corruption, he said.

At a press meet on Thursday, Kumar, the AAP candidate from the border constituency of Bhoa in Pathankot district, had alleged that he was told to deposit Rs one crore in the party fund or sit at home, a charge refuted by the party.

Kumar had alleged that he was summoned by AAP Punjab in-charge Sanjay Singh and the party's organisation secretary Durgesh Pathak to the party office in Chandigarh and given this "instruction".

Kejriwal had shown his "true colours" with these charges thoroughly exposing the "moral degradation and lack of ethics" in the AAP, whose leadership was "only interested in exploiting the Punjab polls to make money", Amarinder alleged.

AAP's poll tickets were evidently "on sale" as revealed by Kumar, the Congress leader said, adding that there were earlier reports of women ticket aspirants being "sexually exploited" on promises of poll tickets by several AAP leaders in Punjab.

Far from showing concern for the welfare of the people of Punjab, as was "evident" from Kejriwal's "continued silence" on the Sutlej Yamuna Link (SYL) canal issue, the AAP leadership was busy "exploiting" the polls "to make money by putting tickets up for sale", Amarinder alleged.

The corruption charges raised by Kumar showed why Kejriwal had chosen this particular time to "run away" from Punjab, leaving his scheduled rallies midway, he claimed.

Coupled with the "poor response" the AAP supremo's election rallies were generating in the state, such serious allegations were enough to show that Kejriwal was "misusing his authority to promote his personal and political interests, without an iota of concern for the welfare of the people", alleged Amarinder.