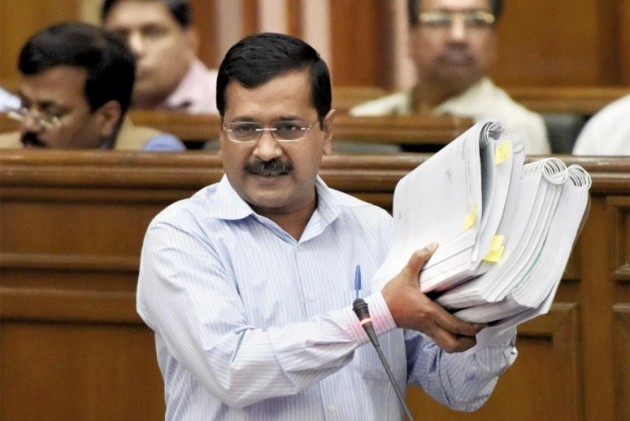 Vinod Kumar, AAP candidate from the border constituency of Bhoa on Thursday alleged that he has been told to deposit Rs one crore as party fund or sit back home, a charge refuted by the party.

He made this exposure at a news conference in Chandigarh.

Bhoa is in Pathankot district.

Giving details, he said that he was summoned by the party's Punjab incharge Sanjay Singh and organisation secretary Durgesh Pathak to the party office in Chandigarh and given this instruction.

"I told them to connect me to party convener and Delhi Chief Minister Arvind Kejriwal. Sanjay Singh connected the phone. When I told him that these people were demanding Rs 1 crore, he said do whatever told by Sanjay Singh.

"He (Kejriwal) said it is high tech poll that costs money," he alleged.

Significantly, Vinod Kumar, a former journalist, has levelled this allegation after getting the ticket.

He said Sanjay told him that in case he was not in a position, the party could refund him Rs 30 lakh that he might have incurred so far on his campaigning.

However, he would have to announce his withdrawal citing family reasons.

He was warned that there were others who were willing to pay upto Rs two crore.

The money is being collected by these people in the name of party fund, he said.

Singh said that the allegations of demanding money are baseless and wild.

"I am ready to face any inquiry regarding it."

"Vinod was not working hard and his campaign was going on a low pace so we were thinking about changing candidate from the seat. Even in the last meeting of Kejriwal with candidates at Sangrur, few candidates were warned for their poor performance and Vinod was among them," said Sanjay.

He said that the party changed its candidates with poor performance in Delhi elections too and will follow the same rule in Punjab as well.

Singh said that Vinod was sending fake reports of his campaign to the party.

"His own campaign incharge sent different reports of his daily activities that show he was lying. He was called and given one week time to pace up his campaign but he could not. Even in the PAC meeting held on Friday it was discussed to replace candidate from Bhoha" said Sanjay.

"It is not the first time that anybody has leveled allegation against me. A person named Pavittar Singh held a press conference and alleged me of demanding money, after that a women, Hardeep Kingra and Davinder Sherawat leveled allegations against me but when it came to show proof the allegations fell flat," he said.

He said that nobody will be allowed to cheat the party and volunteers.

"I was called on November 12 at a house in Chandigarh. AAP leaders Sanjay Singh and Durgesh Pathak told me that I was not campaigning properly. They told me to get Rs 1 crore deposited with them so that they could take care of my campaigning," Kumar told the press.

"I told them that AAP was fighting against corruption and our agenda was to campaign and contest polls without spending money. How could anyone who contests elections by spending Rs 1 crore be honest?"

"When I questioned them, they told me to take Rs 30 lakh and give up my claim on the ticket for the Bhoa seat. I suspect that if they were demanding Rs 1 crore from me, they could have been offered Rs 2 crore by someone else to get me replaced as the AAP candidate," Kumar said.

The AAP has announced its list of 80 candidates for the 117 assembly seats. Elections in Punjab are likely to be held early next year.

The AAP, which has been facing infighting in the past three months, has seen allegations of collection of big sums of money in the run-up to Punjab assembly polls being made against its top leaders from Delhi.

The AAP had suspended its Punjab convener Sucha Singh Chhotepur in August this year after a video clip surfaced, purportedly showing him taking money from a party supporter.