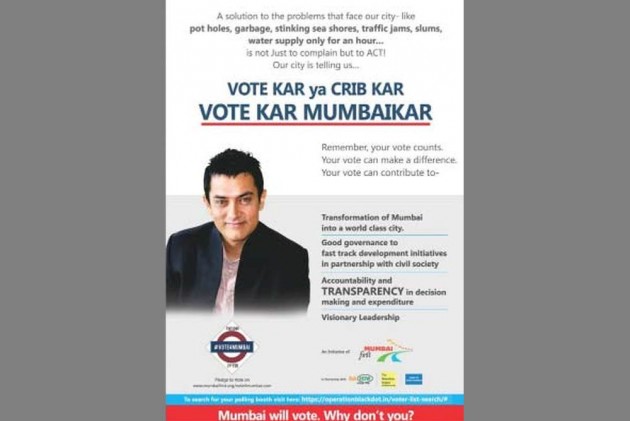 An advertisement published in newspapers today sparked off another controversy with the Shiv Sena, Congress and NCP rushing to the State Election Commission with complaints of violation of the model code.

The Sena objected to the full page advertisement featuring Bollywood actor Aamir Khan which was released by NGO Mumbai First.

Yuva Sena officer-bearer Dharmendra Mishra has lodged a complaint this afternoon with the SEC objecting to the advertisement.

In his complaint Mishra said, "The words and images used in the newspaper clearly say about change of government (refers to the change of power in BMC) which is nothing but an act of their corrupt practices which they are using for the purpose of influencing voters."

The parties argued that the use of words 'transparency' and 'transformation', the key words in BJP's election campaign for the Brihanmumbai Municipal Corporation (BMC) election amounted to influencing voters.

The advertisement also urged Mumbai's electorate to exercise their franchise and stated, among other things, that people must vote for accountability and transparency.

The SEC had banned any political advertisement after 5.30 PM on February 19, the deadline of campaigning.

About 56 per cent voters today exercised franchise across ten municipal corporations in Maharashtra, including the all-important Mumbai civic body BMC which recorded a 55 per cent turn-out.

According to state Congress spokesperson Sachin Sawant, "The advertisement in English and Marathi newspapers clearly highlights the issues of transparency and change promoted by the BJP."

"Although it has been issued by an organisation, everybody knows its close association to Devendra Fadnavis. This is a blatant violation of code of conduct and we have a meeting with the State Election Commissioner to lodge a complaint tomorrow," he said.

NCP spokesperson Nawab Malik has pointed out that as per the new notification of Election Commission, no advertisement can be published 48 hours prior to the polling day.

"BJP has a role to play in this advertisement. The NCP will take up the issue with the SEC and ensure an FIR is filed against those involved," he said.

"Raising the issues faced by citizens for awareness in the election is the right of any organisation. We will take action if a nexus is proved by the complainant," Saharia said.