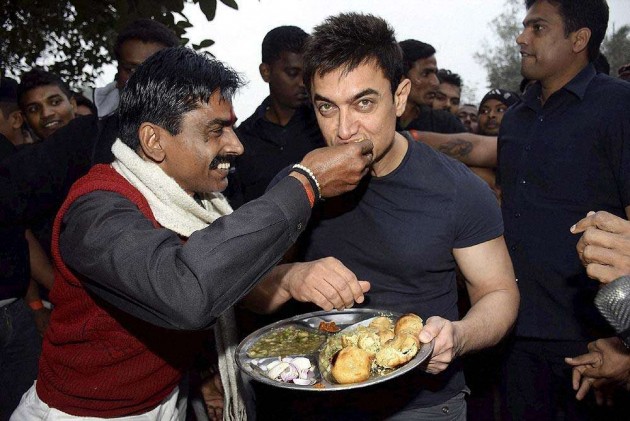 The 49-year-old actor, who will be seen mouthing Bhojpuri dialogues in the movie, said, "We could have chosen any language in the film but I suggested the main character in the film should speak Bhojpuri which will add colour to the movie.

"Though it is well known that the Prime Minister is always busy in work. It would be interesting if Modi watches the film," said Aamir, who was here to promote the film.

The actor said he worked for more than four months on Bhojpuri under guidance of Shanti Bhusan, who hails from Bihar.

"The original script of the movie was in Khari boli but I suggested Bhojpuri which was ultimately chosen," he said.

"My love for Bhojpuri could have been inspired by it," he said.

Khan refused to reveal story line of the movie and details of character saying it would sap the thrill factor.

He, however, said the film has a universal appeal and children, youth as well as elders will equally enjoy it.

On a question about fellow Bollywood stars Salman Khan and Shah Rukh Khan, he said he enjoyed cordial relations with them and would love to work in a movie featuring the three.

Asked if he would suggest Salman to marry, he said, "It is a difficult proposition. I myself have requested him to get married so many times."

Aamir said he had to cancel a trip to Ara, from where Bhojpuri language originated, on suggestion of district administration on the ground that adequate arrangement has not been made.