The AG said that around 10 lakh PAN cards have been cancelled, while out of the 113.7 crore Aadhaar cards issued, no case of duplication has been found by the government. 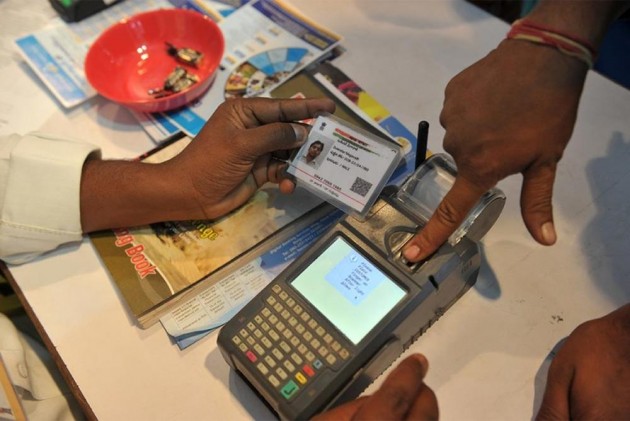 Print
A
A
A
increase text size
Outlook May 02, 2017 17:29 IST 'One Cannot Have an Absolute Right Over His or Her Body' Govt Tells SC On Aadhaar Privacy Concerns

"The arguments on so-called privacy and bodily intrusion is bogus," he said, adding, "one cannot have an absolute right over his or her body".,the centre told the Supreme Court over concerns on Aadhaar privacy.

Government  asserted in the Supreme Court that Aadhaar was made mandatory for PAN card to weed out fake PAN cards which were used for terror financing and circulation of blackmoney, while terming the concerns over privacy as "bogus".

The idea behind bringing Aadhaar was to have a "secure and robust system" to ensure that the identity of a person cannot be faked, it said.

"Today, you have blackmoney which is being used in drug financing and terror financing. So it was decided to bring in a more robust system by which identity of a person cannot be faked," Attorney General Mukul Rohatgi told a bench comprising Justices A K Sikri and Ashok Bhushan.

The top law officer, who was opposing the challenge to making Aadhaar mandatory for PAN card, said out of 29 crore permanent account number (PAN) in India, 10 lakh cards have been cancelled as it was found that there were multiplicity of PAN and a person had more than one PAN card which were being used for "unscrupulous" activity causing a loss to the exchequer.

He said that 113.7 crore Aadhaar card have been issued in the country till date and the government has not found any case of duplication as the biometric system of finger prints and iris scan, which was used in Aadhaar, was the only known technology in the world which is "fool-proof".

The apex court was hearing three petitions challenging the constitutional validity of Section 139AA of the Income Tax Act which was introduced through the latest budget and the Finance Act 2017.

Section 139AA provides for mandatory quoting of Aadhaar or enrolment ID of Aadhaar application form for filing of income tax returns and making application for allotment of PAN number with effect from July 1 this year.

The Attorney General claimed that due to Aadhaar, the Centre has saved over Rs 50,000 crore on the benefit schemes for the poor as well as pension schemes as it has helped in ensuring that the funds from government-run welfare schemes reached the persons who were entitled for it.

Rohatgi said that the biometric information of Aadhaar was in an encrypted format and stored in the central database of the government and it cannot be given to or accessed by anybody except in criminal cases where the court demands it.

"It (Aadhaar) is an effective tool to check terror financing and blackmoney. It ensures that money meant for poor people reaches them...The idea is that burden on honest people who pay tax should not be made unbearable for them," he said.

Referring to how Aadhaar came into existence, Rohatgi said in 2009-2010, it was felt by the government that a huge amount of money meant for benefit of poorer sections was not reaching them.

"We have saved more than Rs 50,000 crore on benefits going to the poor and in pension schemes due to Aadhaar," he said, adding, "rules have been made to ensure the identity of tax payers and stop terror financing and blackmoney."

Regarding section 139AA of the IT Act, the Attorney General said that challenge to a provision can be only on two grounds -- legislative competence or whether it is contrary to the Constitution.

"The Income Tax Act, by its very nature, is coercive so it cannot be violative of Article 19," he said, adding that "Parliament is the best judge of the people. It decides what should be the taxation and what should be the punishment for an offence."

"Taxation is required. The IT Act is coercive in nature as people have to pay taxes. The taxes collected are used for the benefit of people and for betterment of society," he said.

He said that section 139A, which came in 1975, has not been challenged and it had come into existence with a purpose to provide a unique identity for the persons who pay taxes.

Rohatgi said it was done for orderly collection of tax and to ascertain the taxpayers' identity.

He said that even for registration of property, one needs to give his fingerprints and same was the situation when someone went to make a driving licence or passport.

"Today, the only difference is that the photograph and fingerprints are not on paper but in an electronic medium," he said, while asking "what is the bodily intrusion, which the petitioners have argued, I want to know".

Countering the petitioner's arguments, the Attorney General said "nobody can live in a vaccuum as there is social contract as well. When the state is providing some facility, it is entitled to have your identity."

"Can the petitioners today say that they do not have any mobile phone, credit card, driving licence, passport or other identification and they live in the Himalayas," he said.

He said that the law was very clear and if the government cannot give benefit of an scheme to everybody, that does not mean that it cannot start a beneficial scheme

To this, the bench, which would continue hearing arguments in the matter tomorrow, said, "Here, it is not about social welfare scheme. It is about income tax."

During the arguments, the Attorney General said that "We have found multiple PAN cards but not multiple Aadhaar. Out of 113.7 crore Aadhaar, we have not found that one person is having more than one Aadhaar card."

He also said that India has signed an agreement, Foreign Account Tax Compliance Act, with USA and if we do not have an robust system in place, information can be compromised.

"There are international obligations also," he said.

Dealing with the arguments advanced by the petitioner's that they do not want to part away with their body, Rohatgi said, "you may say that you want to be forgotten but state do not want to forget you".

He said, "there can not be any ban the Parliament and it has the supreme power of legislation."

"We are proceeding on a premise that Aadhaar is voluntary but the language of the Act says something different. The requirement is either you have it or if you do not have it, you go an apply for it. Proviso can not be bigger than the main section which says it has to be mandatory," he said.

Rohatgi said that issue of interim orders passed by the apex court cannot be a ground to assail a parliamentary legislation and there was no ban on Parliament to enact section 139AA. He said the section only says that if you pay tax, the government want Aadhaar details.

"People want identification and they cannot say that Aadhaar is an demon. You cannot have a myopic kind of challenge that I do not want this. At the end of the day, we want an orderly society. If one want to pay tax, he has to comply with the rules," he said.

Senior advocates Shyam Divan and Arvind Datar, who were representing the petitioners, had earlier argued that section 139AA was unconstitutional and it was in "direct collision" with the Aadhaar Act.

Divan had contended that there was no question of forcing a person to give his consent for Aadhaar and this was an issue which "alters the relationship of Republic of India with its citizens".

The petitioners have also argued that a law abiding tax payer cannot be forced to give his Aadhaar while filing income tax return and this was like an "electronic leash" as government would keep a tab on its citizens.

The apex court had earlier put a poser as to why there was no objection from lawmakers on the government's decision to make Aadhaar mandatory for making PAN cards.

The Attorney General had also clarified that nowhere in section 139AA of IT Act, was it mentioned that it would be effective with retrospective effect.

The government had earlier told the apex court that fake PAN cards were being used to "divert funds" to shell companies.